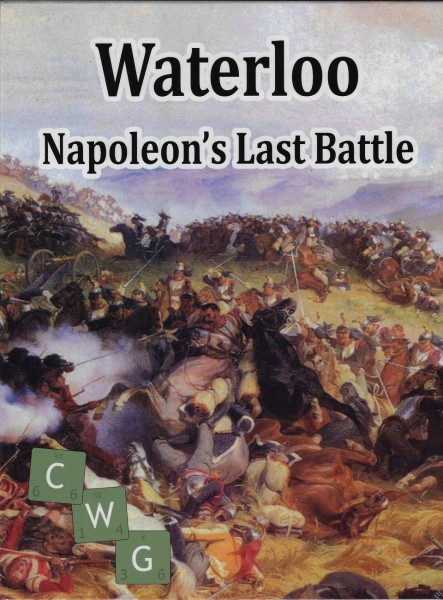 On April 6, 1814, Emperor Napoleon was forced to abdicate the throne and following the Treaty of Fontainebleau was exiled to Elba. Less than a year later, Napoleon escaped Elba and sailed to the French mainland with a group of around 1,000 supporters. On March 20, he returned to Paris, where he was welcomed by cheering crowds, while King Louis XVIII fled France.

Upon Napoleon's return to France, a coalition comprised of Austria, England, Prussia and Russia began preparing for war.  Planning to strike preemptively, Napoleon raised a new army and embarked on what came to be known as his Hundred Days campaign.

In June, Napoleon's forces marched into Belgium, where the British and Prussian armies were camped.

On June 18, 1815 Napoleon led his Armée du Nord into history near the village of Waterloo.   It would be Napoleon's last battle.

Fast paced and exciting area impulse system in which players take alternating impulse actions until both players pass or a die roll ends the impulse phase potentially catching one or both players off guard.   The map is broken up into areas of differing sizes and shapes depending on the type of terrain.  Units are activated in an area by their respective Leaders. The combat system is based on opposing die rolls, after adding the strength of their units, terrain and other bonuses.  Commanders and leaders can potentially lead attacks or intervene to save a failing defense.

Birds of Prey: Missile with a Man in it Deluxe...

€49.95 *
Viewed
This website uses cookies, which are necessary for the technical operation of the website and are always set. Other cookies, which increase the usability of this website, serve for direct advertising or simplify interaction with other websites and social networks, will only be used with your consent.
Decline Accept all Configure