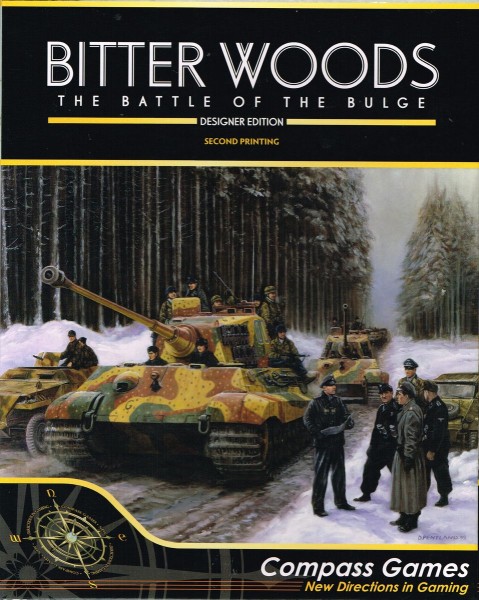 On December 16th 1944, Germany launched its last, desperate offensive in the West. The result was The Battle of the Bulge, a brutal struggle in a dismal winter landscape set against an enemy imbued with a fanatic conviction that victory could be snatched from defeat. It was the United States Army's greatest and fiercest battle of World War II. Over a million men and thousands of guns, tanks, and other fighting vehicles were engaged. In those "Bitter Woods," fighting against heavy odds, the American soldier slowed and then stopped the spearhead of two elite Panzer Armies, forever emblazing themselves in the annals of military history.

Designer Edition Bitter Woods is the premier edition of this highly acclaimed regimental level Battle of the Bulge game and includes all aspects of the original game plus the expansion edition. The potential for mechanized exploitation movement and an appropriate Allied counterattack capability ensure an exciting challenge for both sides. Designer Edition Bitter Woods is highly playable, yet historically accurate, further ensuring a game you will want to revisit for years to come.

Normandy - The Beginning of the End...

Twilight of the Gods: Season of Prophecy

€56.95 *
Viewed
This website uses cookies, which are necessary for the technical operation of the website and are always set. Other cookies, which increase the usability of this website, serve for direct advertising or simplify interaction with other websites and social networks, will only be used with your consent.
Decline Accept all Configure