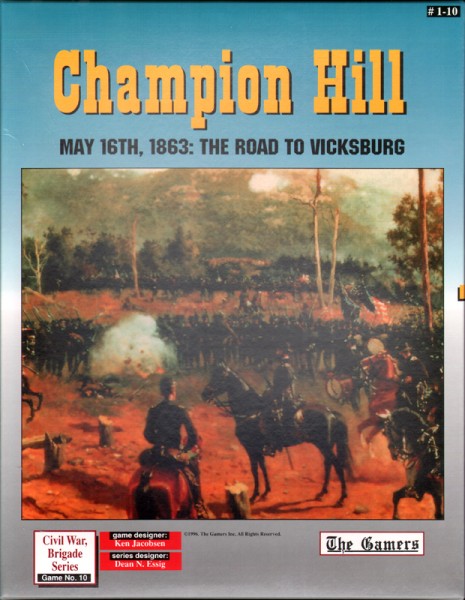 May 16, 1863: After six months of frustration in front of Vicksburg, Ulysses S. Grant has hit upon a formula for success: slip south of the Rebel fortress, cross the Mississippi downstream, and operate in the rear of John Pemberton's Confederate defenders.

Unable to ignore this threat to his supply line, Pemberton has marched out to fight, but he has left half his army behind. The two armies collide in a tangle of thick woods and deep ravines, overlooked by a prominent landmark called Champion Hill.

Champion Hill covers Pemberton's missed opportunity, his one chance to upset Grant's audacious move and prevent the fall of Vicksburg. The game portrays the historical fight and also provides a number of variant options (including J.E. Johnston's Army of Relief) and hypothetical scenarios to see if a more aggressive Confederate response could have kept the vital Mississippi River blocked and prolonged the war.

Related links to "Champion Hill"
Evaluations 0
Read, write and discuss reviews... more
Close menu
Customer evaluation for "Champion Hill"
Write an evaluation
Evaluations will be activated after verification.
Customers also viewed
Customers also viewed
Viewed
This website uses cookies, which are necessary for the technical operation of the website and are always set. Other cookies, which increase the usability of this website, serve for direct advertising or simplify interaction with other websites and social networks, will only be used with your consent.
Decline Accept all Configure