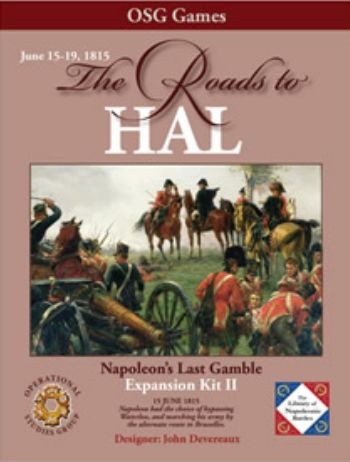 This expansion kit adds one 22x34 map (WX) to the battlefield area and will extend from Brussels to west of Hal, overlapping the (N) and (NX) maps. And a 4-page study folder with three scenarios:
• Expanded Waterloo Scenario: June 18th. Allows Napoleon the option of flanking the Mont St Jean position at the risk of freeing up the 17,000-man Hal force.
• The Fields of Hal Scenario: June 17th - 18th. Hypothetical battle in the Hal environs (below). Can Blucher affect the outcome? Wellington believed that this area was the most likely location for the culminating battle, rather than Mont St Jean.
• Extended Campaign Scenario: June 15th - 19th. Provides Napoleon and Wellington more operational options, with more areas to defend, more room for maneuver (and for error).


In addition, several Turn Record Charts and Anglo-Allied Setup Cards will be provided to account for the added map and associated arrival times on the WX map. No additional counters will be needed.


On June 14th, Wellington learned that Napoleon’s invasion of Belgium was imminent. Intelligence reports had confirmed that Napoleon was concentrating his Army in the Maubeuge-Beaumont area to the south of Charleroi and Mons. Napoleon could proceed either via Mons to Hal and Brussels or Charleroi to Mont St Jean to Brussels.

Wellington had foreseen both possible attack routes. He had ordered his staff, two months earlier, to survey suitable battlefield positions for both the Hal and Mont St. Jean areas. Wellington was extremely concerned that the master of maneuver, Napoleon, could outflank his position if the battle occurred at Mont St. Jean. A relatively large force (~ 17,000 men) would be positioned at Hal to block that possibility. If the battle occurred at Hal, these troops would first delay and then form a point around which the battle would be fought.
Wellington wanted to have a viable retreat route around the western environs of Brussels if his troops failed to stop Napoleon. The Hal dispositions were one of the key components to protecting his retreat route and lines of communications.

Watching the “Thursday Night Gamers” play the campaign game on You-Tube, we saw that the attempt to flank Wellington’s position west of Brussels was going to fail because the map maneuver room was limited. Tim Carne added his thoughts on the use of the Hal Forces and the combination of these three points sparked the research to create this proposed expansion. With the additional map and study, players will have a broader range of choices to explore and enjoy.
Historical considerations were weighed carefully, even for the hypothetical Fields of Hal. For example, Wellington and Blucher had previously agreed that Blucher would concentrate his Army at Sombreffe in the event of a French invasion. If Napoleon, had made the westerly approach to Hal, it is very possible that the Prussian I Corps would have regrouped around the vital crossroads of Quatre Bras while II and III Corps made its way from Sombreffe to Quatre Bras. From there, the Prussian Army could march to Hal to assist Wellington or cover his left flank near Mt St Jean. All this is speculative, but the players now have the tools to explore these options using an historical basis.
Related links to "Roads to Hal, Belgium 1815"
Evaluations 0
Read, write and discuss reviews... more
Close menu
Customer evaluation for "Roads to Hal, Belgium 1815"
Write an evaluation
Evaluations will be activated after verification.
Customers also viewed
Customers also viewed

Napoleon's Quagmire
€99.00 *
Viewed
This website uses cookies, which are necessary for the technical operation of the website and are always set. Other cookies, which increase the usability of this website, serve for direct advertising or simplify interaction with other websites and social networks, will only be used with your consent.
Decline Accept all Configure