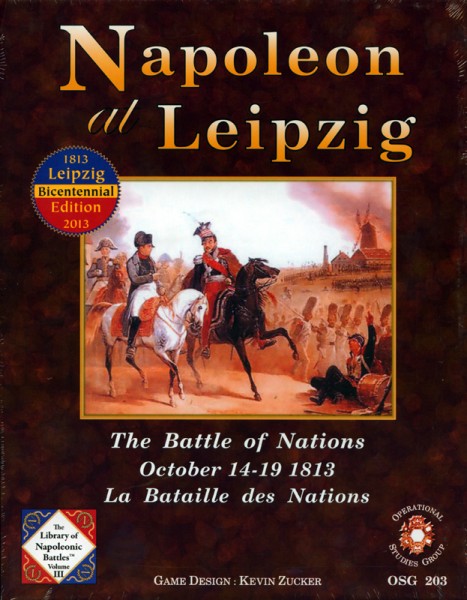 "This game is epic. The combination of command, hidden movement and big stacks means that frontal assaults are both possible and decisive. Where the original game was the classic 'line 'em up and count combat factors,' the new one is much more subtle. Hidden movement creates both local and regional uncertainty."Napoleon at Leipzig is a comprehensive game with a proven track record of excellent re-playability, among the most popular Napoleonic wargames of all time with 20,000 copies in print across the first 4 editions. Now it has a bigger playing area and more manpower for both sides, all working within a smooth and efficient engine of 19th-century warfare.SOME OF THE SURPRISES IN THIS EDITIONEleven additional hexrows of terrain added to the top of the north and bottom of the south maps - provides 25% additional maneuver room for the armies.The reason Napoleon didn't build additional bridges for his army to escape - his Pontoon train was blocked from reaching Leipzig (This is covered by a card). BATTLES SIMULATEDLiebertwolkwitz, Epic Cavalry Battle, 14 Oct.Wachau-Mockern, Fire on Two Fronts, 16 Oct.Leipzig, Triple Envelopment, 17-18 Oct.NEW! Hanau, Grande Armee in Retreat, 29-30 OctDuring the retreat after Leipzig one Bavarian and one Austrian corps were sent to block Napoleon's escape.DESCRIPTION Napoleon's Last Battles System, in the Library of Napoleonic Battles Series: 480 meters per hex, 1 hour per turn, 400-800 men per strength point. Each Approach to Battle game lasts about 20 turns. The Full campaign lasts one week - over 50 turns!COMPONENTSTwo 22" x 34" maps and one 17" x 22" map560 counters100 cards2 rulebooks20 player aidsBoxHanau includes a 17" x 22" map, additional Bavarian and Austrian brigades.

€60.00 *
Viewed
This website uses cookies, which are necessary for the technical operation of the website and are always set. Other cookies, which increase the usability of this website, serve for direct advertising or simplify interaction with other websites and social networks, will only be used with your consent.
Decline Accept all Configure