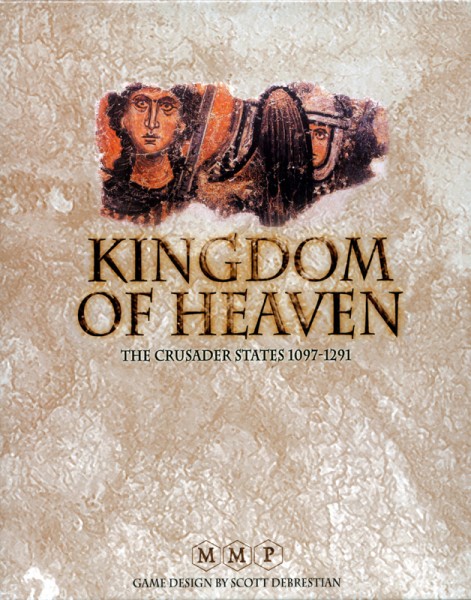 This product is currently not available.
Please inform me as soon as the product is available again.
€76.00 *

In 1097, thousands of lords and knights, soldiers and camp-followers, pilgrims and prophets marched east in response to a Papal appeal, charged with the task of restoring Jerusalem and the Holy Land to Christian control. Their surprising victory led to the creation of the first overseas European colonies and the reshaping of Muslim power in the Middle East. The repercussions of their journey continue to live with us today.

In Kingdom of Heaven - The Crusader States 1097-1291 (KOH) two players use cards to activate forces, trigger random events, conduct diplomacy or prosecute siege warfare on a vast arena stretching from Antioch to Cairo and from Cyprus to Mosul.

Nine scenarios cover all the major campaigns of the era, from the First, Second and Third Crusades to the Mongol invasion and the rise of the Mamluk Empire. In addition to the ‘basic deck,’ each scenario adds different cards representing historical events unique to that campaign. Turns are yearly, and most scenarios can be finished in 3-4 hours.

Related links to "MMP: Kindom of Heaven"
Evaluations 0
Read, write and discuss reviews... more
Close menu
Customer evaluation for "MMP: Kindom of Heaven"
Write an evaluation
Evaluations will be activated after verification.
Customers also viewed
Customers also viewed
Viewed
This website uses cookies, which are necessary for the technical operation of the website and are always set. Other cookies, which increase the usability of this website, serve for direct advertising or simplify interaction with other websites and social networks, will only be used with your consent.
Decline Accept all Configure