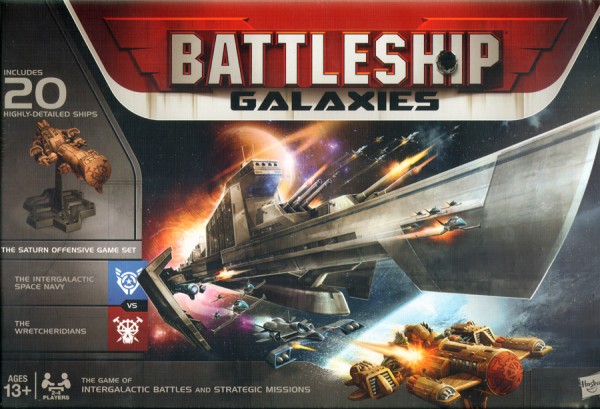 This product is currently not available.
Please inform me as soon as the product is available again.
€60.95 *

Outsmart and outmaneuver your enemy with courage, instinct and strategy as the theater of battle launches into the vast reaches of space.

When Saturn´s mining settlement is attacked by warmongering aliens known as the Wretcheridians, the newly commissioned First Fleet of the Intergalactic Space Navy races back from the edges of the solar system to mount a fierce defense against the invaders.

Outgunned and outnumbered, the brave young ISN officers strategically drive the battle deep into the rings of Saturn to begin a deadly game of hunt and destroy.

Command the ISN fleet and defend the settlement; or lead the attack as the Commander of the ruthless Wretcheridian invaders.

Related links to "Battleship Galaxies"
Evaluations 0
Read, write and discuss reviews... more
Close menu
Customer evaluation for "Battleship Galaxies"
Write an evaluation
Evaluations will be activated after verification.
Customers also viewed
Customers also viewed
Viewed
This website uses cookies, which are necessary for the technical operation of the website and are always set. Other cookies, which increase the usability of this website, serve for direct advertising or simplify interaction with other websites and social networks, will only be used with your consent.
Decline Accept all Configure