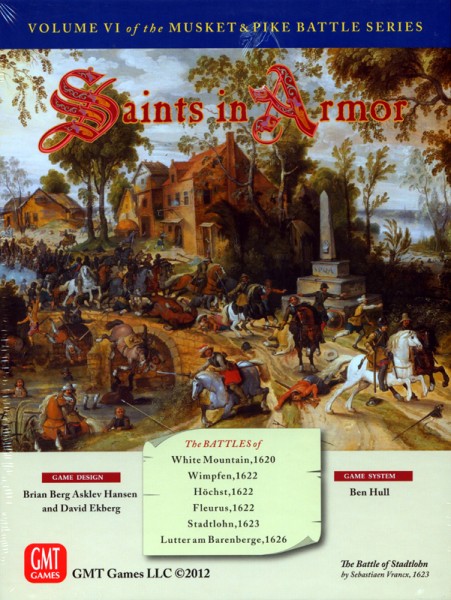 This product is currently not available.
Please inform me as soon as the product is available again.
€69.00 *

Description Evaluations 0
Description
The Bohemian Revolt of 1618 triggered the Thirty Years War and in the early period of the war... more
Close menu
Product information "GMT: Saints in Armour"

The Bohemian Revolt of 1618 triggered the Thirty Years War and in the early period of the war the Catholic/Imperial cause enjoyed an almost unbroken string of victories. This game, part of the Musket and Pike Battle Series, simulates six battles of the early Thirty Years War. In the period covered, the armies deployed in more compact formations so each battle fits on half of a standard map.

The battles covered in this game are:

The combined army of the Holy Roman Empire and the Catholic League under Johann Tserclaes, the Count of Tilly, strike a blow directly at the Bohemian capital of Prague. The Bohemians make a stand on the slopes of White Mountain outside the town. Their Transylvanian allies desert them at the most critical point of the battle, causing the total collapse of the Bohemian army and its cause.

This is a short scenario where the qualitatively superior Catholic forces must crush the strongly positioned Bohemians who are bolstered by a large Transylvanian contingent of questionable reliability.

Related links to "GMT: Saints in Armour"
Evaluations 0
Read, write and discuss reviews... more
Close menu
Customer evaluation for "GMT: Saints in Armour"
Write an evaluation
Evaluations will be activated after verification.
Customers also viewed
Customers also viewed
Viewed
This website uses cookies, which are necessary for the technical operation of the website and are always set. Other cookies, which increase the usability of this website, serve for direct advertising or simplify interaction with other websites and social networks, will only be used with your consent.
Decline Accept all Configure