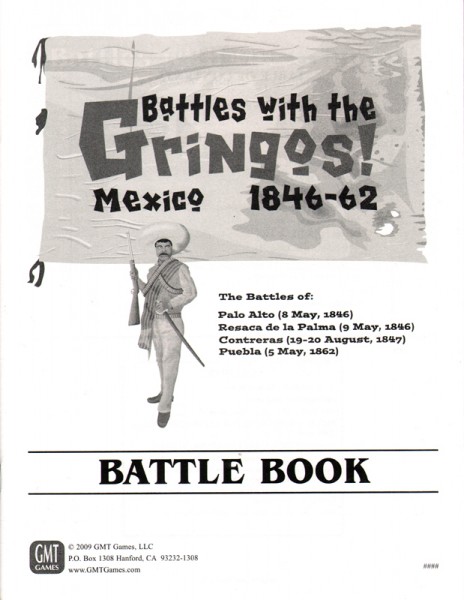 Description Evaluations 0
Description
Battles with the Gringos fills in most of the blanks - the important battles we had to leave... more
Close menu
Product information "GMT: Battles with Gringos"

Battles with the Gringos fills in most of the blanks - the important battles we had to leave out - for our coverage of The Mexican War. And, in addition to providing the usual rules clarifications and updates, we have added a rule for using Skirmishers that will be usable in all games in the GBACW system. But it's the battles that make the game, and we have four half-map engagements that are each different, each with its own, unusual terrain, each with a set of problems facing both players. And each battle takes only a couple of hours, as well as being very playable solitaire.

You will need GRINGO to play the battles herein.

Related links to "GMT: Battles with Gringos"
Evaluations 0
Read, write and discuss reviews... more
Close menu
Customer evaluation for "GMT: Battles with Gringos"
Write an evaluation
Evaluations will be activated after verification.
Customers also viewed
Customers also viewed
Viewed
This website uses cookies, which are necessary for the technical operation of the website and are always set. Other cookies, which increase the usability of this website, serve for direct advertising or simplify interaction with other websites and social networks, will only be used with your consent.
Decline Accept all Configure