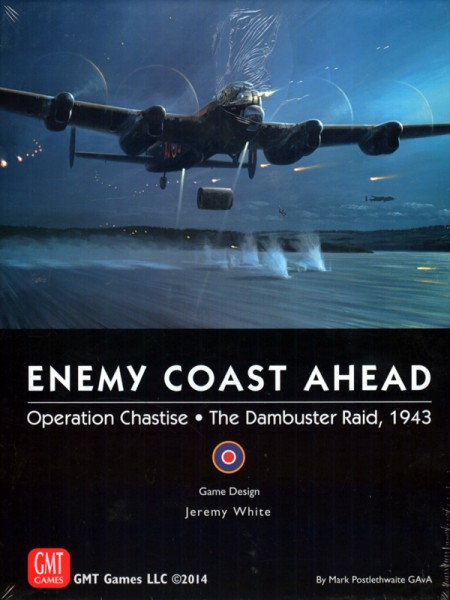 This product is currently not available.
Please inform me as soon as the product is available again.
€53.00 *

In Enemy Coast Ahead: The Dambuster Raid, you command a newly formed squadron assigned the task of breaching the dams in the Ruhr Valley.  Not only are you presented with a variety of decisions, you play the invisible hand of fate as your crews endure the hazards of a dangerous night raid. Play the campaign and you get to organize and train the squadron, or play the historical scenarios.
Play solitaire and you do it all. Play with teammates and one of you is the squadron commander giving orders to subordinates. The squadron commander wins if the dams are breached, while subordinates compete to accomplish their orders with the least casualties to the men and machines assigned to them. Only one subordinate will win. Of course, if the dams are not breached, you all lose.
Each Lancaster is represented by its own 1” counter. Each bomber will carry two or three 5/8” markers representing aircrew, ordnance and possibly an elite crewman. All the men awarded decorations before or during the raid are represented in this game by their own marker, each imparting a unique characteristic to its crew.  Even the squadron commander’s dog gets his own marker!
Ground crew are also featured in the campaign game, represented by markers rated for a variety of tasks. You will have to requisition and manage your Erks effectively while maintaining security. That’s not so easy. You may find it necessary to transfer the local barmaid or take the drastic measure of transferring 54 squadron out of Scampton airbase, or even quarantining the base altogether.
Reconnaissance is crucial. In the campaign game you will need to survey the defenses of the dams and the routes to them, but too much recon and you risk tipping off the enemy.  But how much is too much? You will have to target the right dams or the right combination of dams, to get the job done. Möhne and Eder are the juiciest targets, but what if they are well defended? Do you risk it, or go for the other dams hoping to breach enough of them to achieve your goal?

Training is vital. In the campaign game you will requisition and then train your crew to fly at exceptionally low altitude, maintain a steady speed, locate the target in the dead of night, and release ordnance at precisely the right distance from the lip of the dam. You will only have just so much time to prepare your squadron. You might have to decide what is more important: learning to maintain the right altitude and speed while preparing to release ordnance, or the ability to find the dam? If your men don’t master these skills quickly you may have to favor one over the other. You can always impose extra training, but push your men too hard and they become fatigued, perhaps even damaging their bomber in training or worse, crashing it. And if you don’t push them enough you may run out of time. The moon will be right only for so long and the reservoirs are slowly rising. Once full, the Germans will open the valves and release the water, making them that much harder to breach. The clock is ticking.
The game board is organized into three sections, the Mission Planning Blotter, the Flight Map (from Scampton to the Ruhr), and the Target Maps. The first scenarios use only the Target Maps, while larger scenarios will use them as well as the Flight Map. Only the campaign game takes full advantage of the Planning Mission Blotter, allowing you to organize and train your squadron, assign tasks to ground crew, and modify the Lancasters for this unique raid.  The Lancasters were modified in a number of ways for Operation Chastise.

A Wing and a Prayer - Bombing the Reich

Enemy Coast Ahead: The Doolittle Raid

Shadows of Brimstone - Serpentmen of Jargono...

€49.95 *
Viewed
This website uses cookies, which are necessary for the technical operation of the website and are always set. Other cookies, which increase the usability of this website, serve for direct advertising or simplify interaction with other websites and social networks, will only be used with your consent.
Decline Accept all Configure