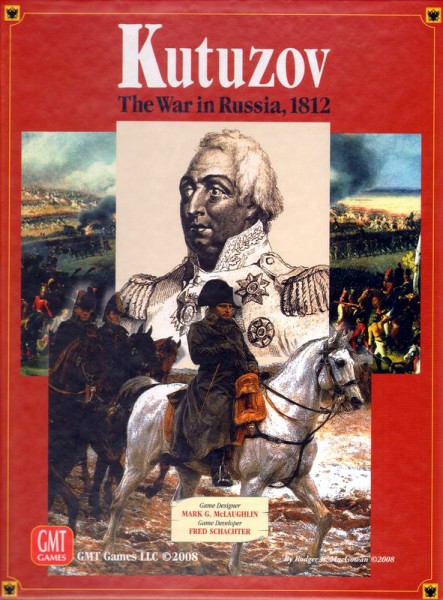 Kutuzov is an interactive, play it complete in one-sitting card-driven game of sweeping manoeuvres, epic battles, storied sieges, lethal attrition and crucial-to-win troop morale for one to four players from the designer of The Napoleonic Wars and Wellington.

In the spring of 1812 Emperor Napoleon of France gathered the regiments of 20 nations together into the largest military force yet raised in Europe. That June he led this Grand Army of over 600,000 men across the Nieman River to begin what he believed would be his greatest and perhaps final triumph: the invasion and subjugation of Russia. As the defending armies fell back before this prodigious onslaught, Tsar Alexander turned to a pugnacious and crafty old warrior to help save his country, his people and his Romanov Dynasty: Marshal Mikhail KUTUZOV.

Kutuzov uses the same basic rules system as found in The Napoleonic Wars, as it has been modified for even more interactive play in Wellington . As with the later title, there are no diplomatic or political rules: other than those which come into play should Imperial morale fall so low as to trigger the desertion of the Austrians or outright revolt of the Prussians. There are no naval rules other than a Russian ability to move between friendly ports and a "Hornblower" Home Card that allows for a Russian invasion on the Baltic Coast). Kutuzov is thus primarily a game of manoeuvre and combat, where players can recreate the sieges and legendary battles made so familiar to gamers as brought to life in such great books as Leo Tolstoy's War and Peace.

Related links to "GMT: Kutuzov"
Evaluations 0
Read, write and discuss reviews... more
Close menu
Customer evaluation for "GMT: Kutuzov"
Write an evaluation
Evaluations will be activated after verification.
Customers also viewed
Customers also viewed
Viewed
This website uses cookies, which are necessary for the technical operation of the website and are always set. Other cookies, which increase the usability of this website, serve for direct advertising or simplify interaction with other websites and social networks, will only be used with your consent.
Decline Accept all Configure