"Click & Meet" possible! - With an appointment (030 797 06 126) and a negative Corona test result (24h).
Cookie preferences
This website uses cookies, which are necessary for the technical operation of the website and are always set. Other cookies, which increase the comfort when using this website, are used for direct advertising or to facilitate interaction with other websites and social networks, are only set with your consent.
Configuration
Technically required
These cookies are necessary for the basic functions of the shop.
"Allow all cookies" cookie
"Decline all cookies" cookie
Amazon Pay
CSRF token
Cookie preferences
Currency change
Customer recognition
Customer-specific caching
Individual prices
PayPal payments
Selected shop
Session
Comfort functions
These cookies are used to make the shopping experience even more appealing, for example for the recognition of the visitor.
Note
Statistics & Tracking
Affiliate program
Track device being used
Categories
Information 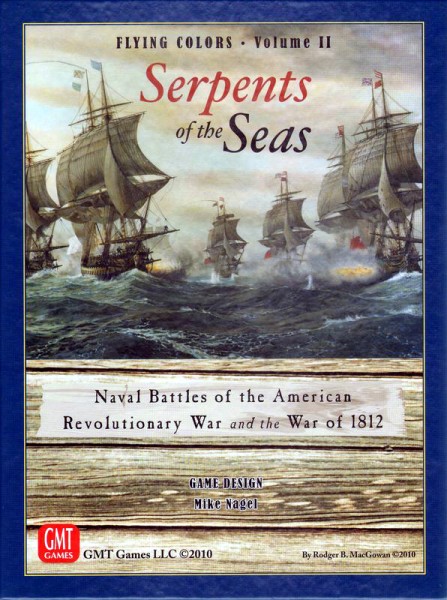 Serpents of the Seas is the second volume in the Flying Colors series of naval combat games, and represents frigate actions and the rise of the American Navy. Unlike the larger battles between ships of the line depicted in Flying Colors, Serpents of the Seas includes sixteen battles from the American Revolutionary era and the War of 1812 that involve smaller ships -- from tiny gunboats with only one or two cannon through “5th Rate” frigates of less than 50 guns. Also depicted are three dozen “Ship Duels” between one or two vessels on a side, like the mighty Constitution (“Old Ironsides”) against her foes Java and Guerriere. To make these duels more challenging, an all new initiative system has been created using activation cards that might grant players a jump on their opponents, but limit their flexibility in the process. The cards can also be used as events that provide additional shipboard flavor. These new systems are fully compatible with the original Flying Colors game, with mechanics that can be selected a la carte.

Atlantic Chase - The Kriegsmarine against the...

La Bataille de Lützen
€80.00 *
Viewed
This website uses cookies, which are necessary for the technical operation of the website and are always set. Other cookies, which increase the usability of this website, serve for direct advertising or simplify interaction with other websites and social networks, will only be used with your consent.
Decline Accept all Configure