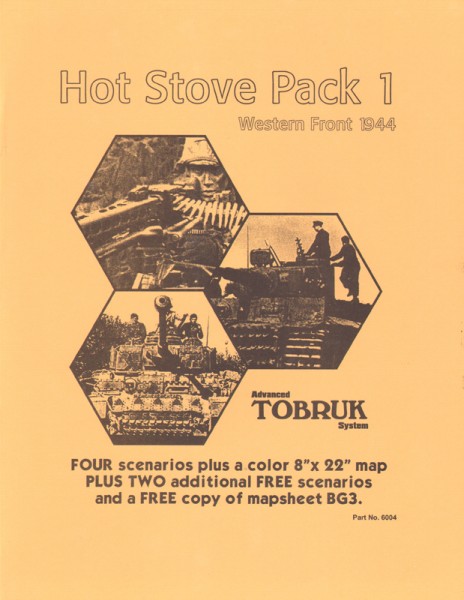 HOT STOVE MINI PACK 1 is CH’s way to keep the ATS fires burning while major releases assemble on the horizon. And what better way to stay ‘plugged in’ than to fight it out at Villers-Bocage, as Tigers, Panzers, Fireflys, Cromwells and Stuarts...not to mention Panzerfaust carrying soldiers...hunt one another amidst the buildings of this tiny Normandy village? Or handling a unit of Canadian soldiers as they attempt to withstand the full-on counter-attack of Eastern Front veterans from the 12th SS Panzer Regiment?

HOT STOVE MINI PACK 1 consists of FOUR new Western Front 1944 scenarios printed on their own cards, each playable on the first of a BRAND NEW SERIES of 8” x 24” connectable maps. But that’s not all. You also receive a copy of mapsheet BG3 AS OUR GIFT, fresh from a new printing, along with TWO MORE 1944 scenarios FREE OF CHARGE, for a total of SIX scenarios and TWO maps for a ridiculously LOW price. You’ll just KNOW this set is meant to thank our loyal ATS enthusiasts for their awesome support of the system.

Related links to "Critical Hit: ATS: Hot Stove Pack 1"
Evaluations 0
Read, write and discuss reviews... more
Close menu
Customer evaluation for "Critical Hit: ATS: Hot Stove Pack 1"
Write an evaluation
Evaluations will be activated after verification.
Customers also viewed
Customers also viewed
Viewed
This website uses cookies, which are necessary for the technical operation of the website and are always set. Other cookies, which increase the usability of this website, serve for direct advertising or simplify interaction with other websites and social networks, will only be used with your consent.
Decline Accept all Configure