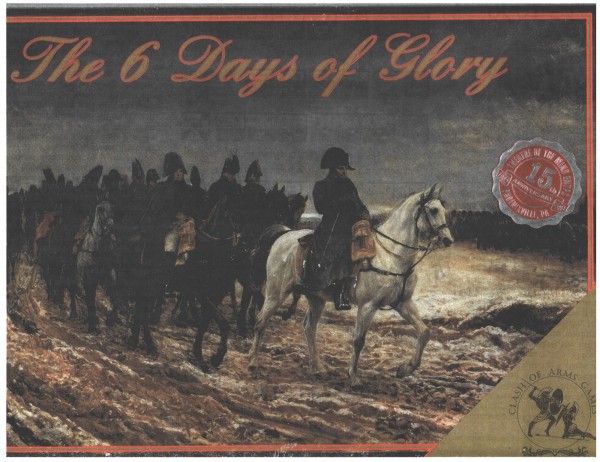 Description Evaluations 0
Description
From Clash of Arms: On to Paris! Napoleon in retreat, full. Napoleon was defeated in the... more
Close menu
Product information "The 6 Days of Glory"

Napoleon in retreat, full. Napoleon was defeated in the battle of Leipzig the previous year. He was determined to make one last stand on the road to Paris. Facing coalition between Russian under Blucher and Russian under Sacken, Napoleon caught them and was about to crush them in decisive battles before Paris in 6 days of February, 1814.

The Six Days of Glory is an operational Napoleonic game. 3 short scenarios are included, covering the campaigns in three separate battles at three cities along the road to Paris: Champaubert (9~10 Feb); Montmirail (11~12 Feb) and Vauchamps (13~14 Feb), each playable in less than 1 ½ hours. A campaign scenario linking all three (9~14 Feb) battles from the beginning to the end can be completed in less than 3 hours.

The French moves first in all scenarios. The game has a standard command check – move – combat sequence with an additional night turn on each turn during which armies can force march to out maneuver the enemy. Features include Chain-of-Command and Leadership Initiative, Artillery Bombardment, Supply and demoralization, Repulse at odds greater than 5-to-1, Movement across Pontoon Trains and Bridges (Allied only), and an interesting weather effect of forced mud on wheeled unit during the afternoon (PM) turn. Team play is also possible where Allied command is divided between Prussian and Russian and thus communication between the two is not allowed unless written messages are exchanged.

Khyber Rifles: Britannia in Afghanistan
€16.95 *
Viewed
This website uses cookies, which are necessary for the technical operation of the website and are always set. Other cookies, which increase the usability of this website, serve for direct advertising or simplify interaction with other websites and social networks, will only be used with your consent.
Decline Accept all Configure