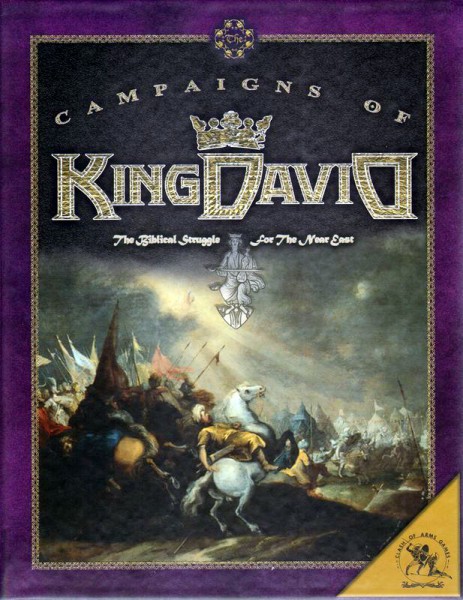 The Campaigns of King David is Rob Markham's multi-player simulation of the struggle for supremacy in the biblical area of Israel and its immediate neighbors during the reign of King David. Two to five players attempt to achieve their victory conditions (control of cities). The game is 7 turns, each with 5 separate sections. Four of the sections play very quickly (Initiative Determination, Diplomacy, Drawing Phase Chits, and determining if victory conditions have been met. The fifth section, Phases, has 12 Actions. Each Action consists of one specific type, movement/combat, obtaining resources, obtaining food, army maintenance and building, etc. The 12 Actions are chosen randomly with the first six shown face up, allowing the players to know the order. The remaining six are displayed face down, providing some uncertainty as to the next Action to occur. As there are 15 Action chits from which to choose, players never know exactly what will occur the second half of the Phase sections. Players must husband their resources and food to maintain their field armies, build and re-equip units, improve fortified cities, and wage battle.

Play is balanced, with each nation's victory conditions tailored to its historical situation. Game duration ranges from 3 hours for a two-player game up to 5-6 hours for a five-player game.

In The Trenches: Rising Sun

Avalanche Press: Granada
€38.00 *
Viewed
This website uses cookies, which are necessary for the technical operation of the website and are always set. Other cookies, which increase the usability of this website, serve for direct advertising or simplify interaction with other websites and social networks, will only be used with your consent.
Decline Accept all Configure