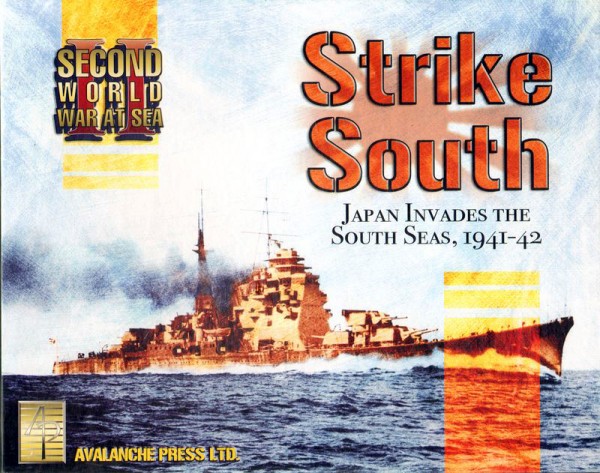 "Strike South" is a "Second World War at Sea"-series game based on the Japanese efforts in early World War 2 to seize the rich assets of the Dutch East Indies. There are 140 “long” playing pieces, depicting the major fleet units of both sides: battleships, aircraft carriers, cruisers and fleet destroyers. There are also 280 square playing pieces, half the size of the ship pieces, mostly depicting aircraft but also smaller warships and markers.

The game comes with two operational maps, covering the South China Sea and the East Indies, and these maps overlap with the maps in the "Eastern Fleet" product.

As with all "Great War at Sea"/"Second World War at Sea" games, the tactical map is a generic field of blue hexagons that ships and aircraft move to when fleets meet on the operational maps. Combat is simple - roll 1d6 for every 'factor' the ship has, with a result of '6' equaling a hit. Compare the weapon that hit (primary gun, secondary gun, tertiary gun, torpedo, or bomb) vs the armor of the area hit to determine if penetration occurred. If it did, mark off a damage box.

"Strike South" includes 15 scenarios, of which 8 of these are limited "Battle Scenarios", that just use the tactical map. The larger 'Operational Scenarios' can take some time to play out - sometimes a whole evening, although Avalanche Press tries to focus them on a 2-hr timeframe - and include such actions as the last mission of the British Battleship Prince of Wales, the Battle of the Java Sea, the Battle of Sunda Strait, and the Japanese invasion of the Philipines.

Related links to "AP: WWII at Sea: Strike South"
Evaluations 0
Read, write and discuss reviews... more
Close menu
Customer evaluation for "AP: WWII at Sea: Strike South"
Write an evaluation
Evaluations will be activated after verification.
Customers also viewed
Customers also viewed
Viewed
This website uses cookies, which are necessary for the technical operation of the website and are always set. Other cookies, which increase the usability of this website, serve for direct advertising or simplify interaction with other websites and social networks, will only be used with your consent.
Decline Accept all Configure