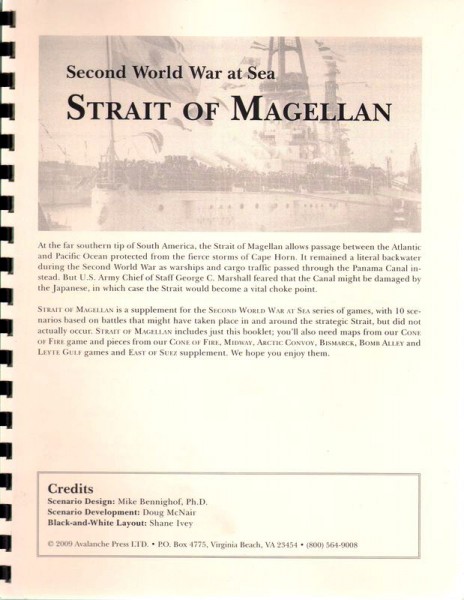 The stormy waters at the Southern Cone of the Americas saw very little fighting during the Second World War. But that didn't keep staff officers from the South American navies and the Royal Navy from wondering what would happen if the Axis fleets did penetrate into the region. U.S. Army Chief of Staff Gen. George C. Marshall considered a Japanese attempt to damage or destroy the Panama Canal to be the likely opening move of a war in the Pacific, making the sea lanes around Tierra del Fuego vital to the Allied war effort.

Strait of Magellan is a supplement for the Second World War at Sea series. There are ten scenarios, or separate game situations, based on battles that might have taken place in these waters, but ultimately did not. This module is not playable by itself, but requires ownership of our Cone of Fire, Midway, Bismarck and Leyte Gulf games and our East of Suez supplement.

Related links to "AP: WWII at Sea: Strait of Magellan"
Evaluations 0
Read, write and discuss reviews... more
Close menu
Customer evaluation for "AP: WWII at Sea: Strait of Magellan"
Write an evaluation
Evaluations will be activated after verification.
Customers also viewed
Customers also viewed
Viewed
This website uses cookies, which are necessary for the technical operation of the website and are always set. Other cookies, which increase the usability of this website, serve for direct advertising or simplify interaction with other websites and social networks, will only be used with your consent.
Decline Accept all Configure