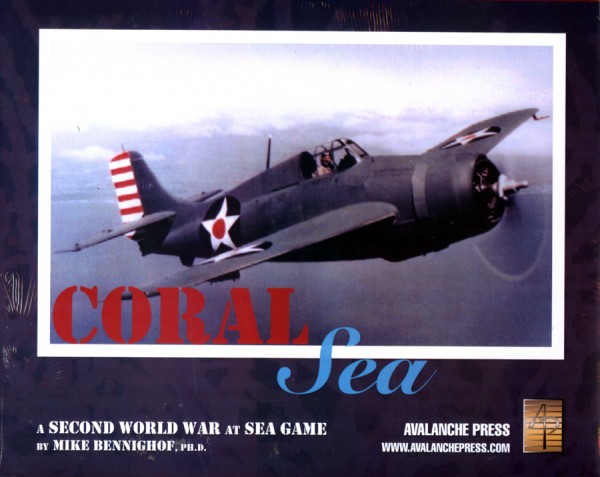 Description Evaluations 0
Description
In May 1942, the Japanese sought to capture Port Moresby on the south coast of New Guinea and... more
Close menu
Product information "AP: WWII at Sea: Coral Sea"
In May 1942, the Japanese sought to capture Port Moresby on the south coast of New Guinea and interrupt communications between the United States and Australia. Such a move, they hoped, would bring the Americans to battle.
The United States Navy needed no special inducement to fight its nation's enemies. Two American aircraft carriers met one small and two large Japanese carriers in the world's first battle between these powerful new warships. For the first time in naval history, a major battle was decided with no warship of either fleet even sighting an enemy ship directly. Aircraft were the new measure of naval power.
Coral Sea is the new introductory boxed game for the Second World War at Sea series. It covers this key battle and is intended as a gateway for players new to the world's most popular series of naval boardgames. The Japanese player must establish new bases in New Guinea and at Tulagi in the Solomon Islands; the American player must stop them. Forces are very closely balanced, and victory will rest with the player who can best make use of his or her resources.
The 22x17-inch operational map covers the Coral Sea off northeastern Australia as well as surrounding waters. Players maneuver their task forces on this map and search for one another with aircraft, submarines and surface ships. When contact is made, player moves to the tactical map.
The tactical map is a generic blue field of hexagons, used to resolve surface combat. There, ships maneuver and fight using their gunnery and torpedo factors. Each player rolls a number of dice according to the ship’s capabilities, hitting on a result of 6. Gunnery and torpedo damage tables give the results: ships can suffer damage to engines, hull or armament. Air attacks are resolved in similar fashion. The combat systems yield results rapidly but in a historically accurate fashion, giving a good balance of fun and insight.

Related links to "AP: WWII at Sea: Coral Sea"
Evaluations 0
Read, write and discuss reviews... more
Close menu
Customer evaluation for "AP: WWII at Sea: Coral Sea"
Write an evaluation
Evaluations will be activated after verification.
Customers also viewed
Customers also viewed
Viewed
This website uses cookies, which are necessary for the technical operation of the website and are always set. Other cookies, which increase the usability of this website, serve for direct advertising or simplify interaction with other websites and social networks, will only be used with your consent.
Decline Accept all Configure