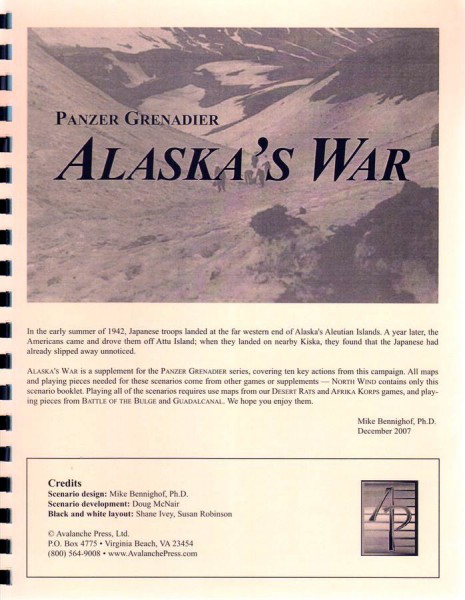 In June 1942, Japanese troops landed in the western Aleutian Islands of Alaska, the only large-scale foreign invasion of American soil since 1815. In May 1943 the Americans invaded Attu Island, sending 15,000 troops against about 2,500 Japanese defenders. The Japanese fought with suicidal determination: 28 fell into American hands as prisoners with the remainder killed in action.

Two months later the Americans launched an even larger invasion of nearby Kiska Island, only to find that the Japanese had evacuated three weeks before and the Americans captured an uninhabited island.

Alaska's War is a supplement based on the Japan's lone invasion of the Western Hemisphere and the American response. The supplement features 10 scenarios.

Related links to "AP: Panzer Grenadier: Alaska´s War"
Evaluations 0
Read, write and discuss reviews... more
Close menu
Customer evaluation for "AP: Panzer Grenadier: Alaska´s War"
Write an evaluation
Evaluations will be activated after verification.
Customers also viewed
Customers also viewed
Viewed
This website uses cookies, which are necessary for the technical operation of the website and are always set. Other cookies, which increase the usability of this website, serve for direct advertising or simplify interaction with other websites and social networks, will only be used with your consent.
Decline Accept all Configure