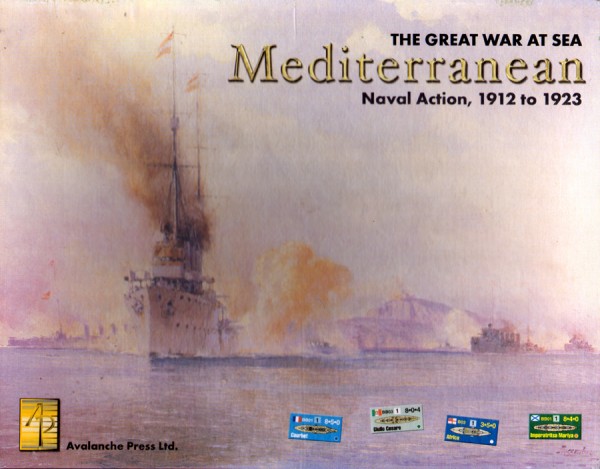 In August 1914, the German battle cruiser Goeben eluded her pursuers, racing across the Mediterranean Sea to Constantinople and setting off a chain of events that would completely change the face of the Middle East and ultimately the world. Her escape is only the best-known of the dozens of naval operations conducted on the Mediterranean, Black and Adriatic Seas during the First World War.

Great War at Sea: Mediterranean is an exciting board wargame based on naval conflict in these seas during the First World War. There are seventy scenarios, or separate game situations, based on actual or potential activities by the fleets of Germany, Austria-Hungary, Turkey, Italy, Russia, France and Britain and the smaller navies of Greece, Bulgaria, Romania and Japan.

Twelve of the scenarios are battle scenarios, useful for learning the game system or for quick fun. The 58 operational scenarios cover a wide variety of situations: The Italo-Turkish War of 1911-1912 and the Balkan War between Greece and Turkey usually pit small and outdated fleets against one another. A number of scenarios cover the First World War’s most intense but possibly least-known naval campaign, the struggle for control of the Black Sea. The struggle for the Adriatic between Austria-Hungary and Italy is also shown. Several scenarios explore war plans for campaigns arching over the entire Mediterranean, based on the actual staff studies. The scenarios are based on primary research in several military archives and represent a serious historical study of the era.

Lone Canuck ASL: The Battle of Königsberg - The...

Great War at Sea - Rise of the Dragon Expansion...

Great War at Sea - Jutland
€79.00 *
Viewed
This website uses cookies, which are necessary for the technical operation of the website and are always set. Other cookies, which increase the usability of this website, serve for direct advertising or simplify interaction with other websites and social networks, will only be used with your consent.
Decline Accept all Configure