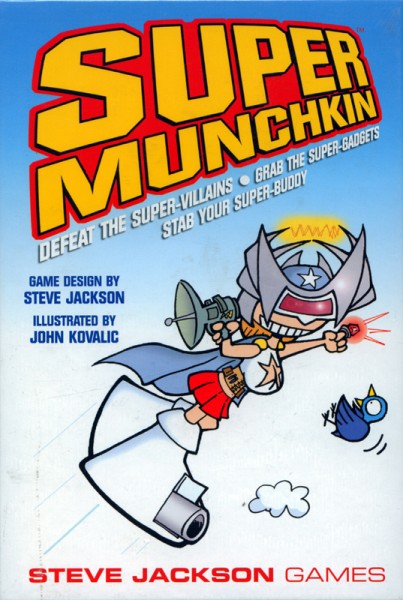 This product is currently not available.
Please inform me as soon as the product is available again.
€22.95 *

Fly through the city. Smash the villains. Backstab your teammates and grab their gadgets.

Munchkin has parodied the classic dungeon, the kung-fu warrior, the space epic, and the creatures of the night. Now it's the superheroes' turn!

Be a Mutant, an Exotic, a Mystic, or a Techno. The higher your Level, the more Powers you can have. Battle dastardly masterminds, devastating monsters, and invading aliens from the next dimension – from the wimpy Bucketman all the way up to Big Ol' Planet Eater Guy himself – and TAKE THEIR STUFF! With the Electro-Mento-Hat, the Telezapinator, and the (jet-powered) Pogo Stick, no foe can stand before you!

Super Munchkin is a stand-alone game, which (of course) can be combined with other Munchkin games. Designed by Steve Jackson and illustrated by John Kovalic, this one is destined to RULE THE WORLD! Mwahahaha!

168 cards, a unique six-sided die, and a rulesheet.

Related links to "Super Munchkin 1"
Product Information
Zu den Produkteigenschaften more
Close menu
Product information "Super Munchkin 1"
Evaluations 0
Read, write and discuss reviews... more
Close menu
Customer evaluation for "Super Munchkin 1"
Write an evaluation
Evaluations will be activated after verification.
Customers also viewed
Customers also viewed
Viewed
This website uses cookies, which are necessary for the technical operation of the website and are always set. Other cookies, which increase the usability of this website, serve for direct advertising or simplify interaction with other websites and social networks, will only be used with your consent.
Decline Accept all Configure