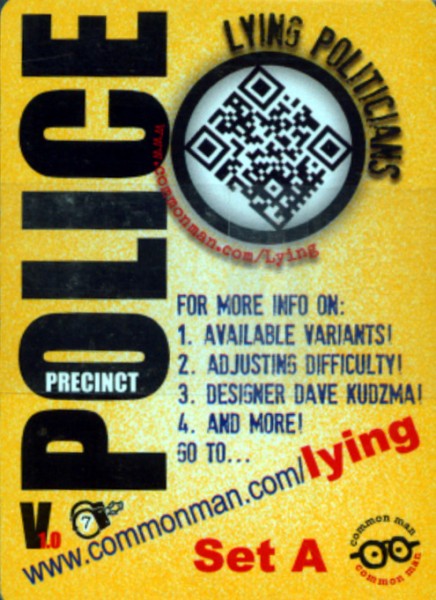 This product is currently not available.
Please inform me as soon as the product is available again.
€19.95 *

RULES
The rules are short and easy to learn.  The official rules are incorporated into the deck (printed directly on a card).  Here’s the entire rules…

Adjusting difficulty is easy and fun.  Here’s some info, pointers, and ideas on this topic…
1.  MORE RED:  If you desire to increase the difficulty, simply add more red to the deck and less blue.  The opposite is true as well.
2.  HIGHER NUMBERS:  If you desire to increase the difficulty, simply add more Red Level-2 cards to the deck and less Blue Level-2 cards.  The opposite is true as well.
3.  COMBINATION:  by using the above two tools, you can engineer almost anything you want in terms of difficulty level.  Keep in mind that it is possible for you to make the entire deck Red (bad cards), Blue (good cards), or anything between.
4.  FORCED REWARDS:  If you wish to make the game extremely hard, you will likely want to add this rule.  The rule dictates that players MUST take rewards in the game when offered.  This forces players to ALSO take the Lying Politician Card that accompanies the reward.  Without this rule, if you stack the deck with cards that are excessively difficult, players will (potentially) always conclude that taking the reward is the wrong decision, but this is not fun!  By requiring that players take the rewards and the Lying Polictian card (both) we avoid this problem and the path to notching up the difficulty as high as you like is wide open.
5.  DECK REDUCTION:  If you decide to Reduce the size of the initial set-up deck you are effectively making the game easier because you will reach a point in the game SOONER whereby the Lying Politicians deck has been exhausted, which enables players to take rewards without needing to take a Lying Politician card (which is a good thing unless you happen to have stacked the deck with more Blue Cards then Red).
6.  LEVEL COUNT:  The following are the counts for each difficulty level in Set A…
Blue Level-2 = 5 total cards
Blue Level-1 = 9 total cards
Red Level-1 = 9 total cards
Red Level-2 = 5 total cards

€13.95 *
Viewed
This website uses cookies, which are necessary for the technical operation of the website and are always set. Other cookies, which increase the usability of this website, serve for direct advertising or simplify interaction with other websites and social networks, will only be used with your consent.
Decline Accept all Configure