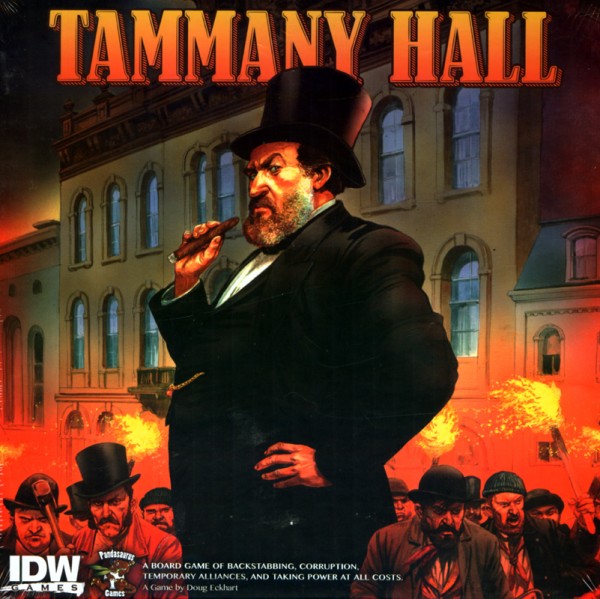 This product is currently not available.
Please inform me as soon as the product is available again.
€62.95 *

Tammany Hall is a game of backstabbing, corruption, temporary alliances and taking power at all costs. If you want to rule New York, you are going to need to play the cities growing immigrant populations against one another. Help the immigrant groups who owe you political favors, call in those favors to slander your rivals and win election.

Tammany Hall was the political machine that dominated New York City politics by organizing the immigrant populations. While the organization’s influence spanned from its founding in the 1790’s to its collapse in the 1960’s this game is set in lower Manhattan roughly between 1850 and 1870; the era of Boss Tweed.
Game Play

boardIn Tammany Hall, players help immigrants settle in New York, collect political favors from those immigrant groups, and send ward bosses into Manhattan to secure votes and slander political opponents. An election is held at the end of every fourth year, and the player who uses his power base best will be elected mayor. The Mayor’s grip on the city is tenuous at best. After every election, the Mayor must pay off his political rivals by placing them in offices that they can wield to try and take control of the city. Every player is your friend, every player is your enemy!

piecesImagine stepping into a bygone era where corruption and greed reign and your closest friends are your fiercest rivals. It’s the underhanded dealing and freewheeling nature of the game that truly sets it apart from any you’ve ever played before. Heavy player interaction, simple rules, and deep strategy married with mechanics that fit the theme to a tee will have you and your friends coming back for more graft than you can shake a gilded walking cane at.

Boss Tweed said the way to have power is to take it. So take power, Rule New York.

Related links to "Tammany Hall"
Product Information
Zu den Produkteigenschaften more
Close menu
Product information "Tammany Hall"
Evaluations 0
Read, write and discuss reviews... more
Close menu
Customer evaluation for "Tammany Hall"
Write an evaluation
Evaluations will be activated after verification.
Customers also viewed
Customers also viewed
Viewed
This website uses cookies, which are necessary for the technical operation of the website and are always set. Other cookies, which increase the usability of this website, serve for direct advertising or simplify interaction with other websites and social networks, will only be used with your consent.
Decline Accept all Configure