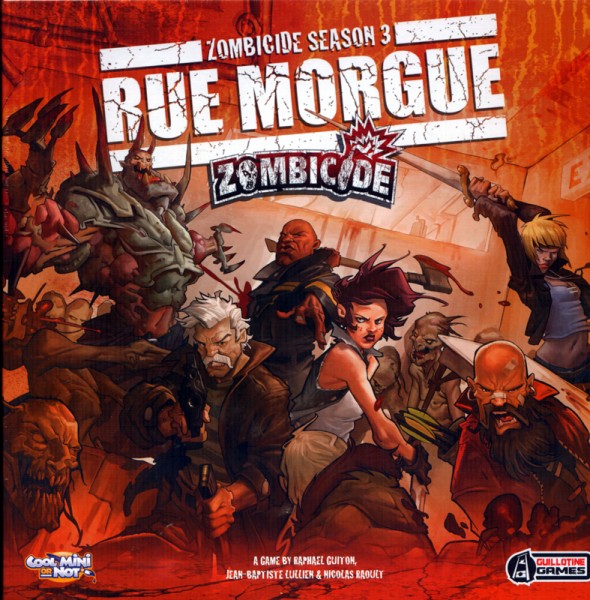 This product is currently not available.
Please inform me as soon as the product is available again.
€99.95 *

Zombicide Season 3: Rue Morgue is a collaborative game for 1 to 12 players, ages 13 and up. Designed as a standalone game, it is fully compatible with all other Zombicide products, like Season 2: Prison Outbreak or the Angry Neighbors expansion. Take the lead of a survivor team and harness its members’ unique skills to achieve victory against the hordes of zombies! The infected creatures are controlled by simple rules and a deck of cards. Play 14 missions on 14 different maps made from the included modular map tiles, or create your own. Find weapons. Kill zombies. The more zombies you kill, the more skilled you get, and the more zombies appear. Choose your team members among twelve survivors and lead them with Team Actions. Launch an assault against zombie nests in towns, haunted camps, and even hospitals. Face the new skinner zombies, deadly opponents able to keep on fighting as crawlers when cut in half!

Supplies are scarce enough to pit team against team in the brutal Competitive mode, but weapons like bows, chainsaws, Molotov cocktails, shotguns, and urban maces can be found anywhere. The only way out is Zombicide!
Rue Morgue box content
Game contents

Related links to "Zombicide - Rue Morgue"
Product Information
Zu den Produkteigenschaften more
Close menu
Product information "Zombicide - Rue Morgue"
Evaluations 0
Read, write and discuss reviews... more
Close menu
Customer evaluation for "Zombicide - Rue Morgue"
Write an evaluation
Evaluations will be activated after verification.
Customers also viewed
Customers also viewed
Viewed
This website uses cookies, which are necessary for the technical operation of the website and are always set. Other cookies, which increase the usability of this website, serve for direct advertising or simplify interaction with other websites and social networks, will only be used with your consent.
Decline Accept all Configure