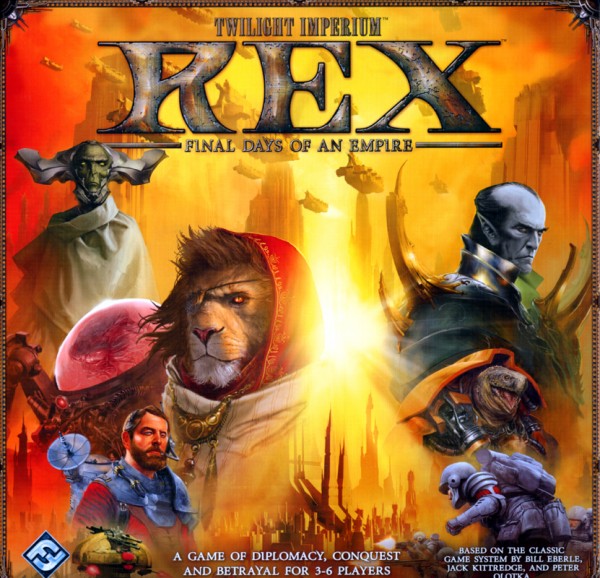 This product is currently not available.
Please inform me as soon as the product is available again.
€43.95 *

The final days of the Lazax Empire began in the seventy-third year of the Twilight Wars, when without warning, the Federation of Sol led a deadly assault directly on Mecatol Rex, the capital planet of the empire itself. A climactic struggle for control of the imperial city followed, fought as much with diplomacy and deception as with troops and starships. This is the story of that struggle.

Rex: Final Days of an Empire is a board game of negotiation, betrayal, and warfare in which 3–6 players take control of great interstellar civilizations, competing for dominance of the galaxy’s crumbling imperial city. Set 3,000 years before the events of Twilight Imperium, Rex tells the story of the last days of the Lazax empire, while presenting players with compelling asymmetrical racial abilities and exciting opportunities for diplomacy, deception, and tactical mastery.

Related links to "Twillight Imperium - REX"
Product Information
Zu den Produkteigenschaften more
Close menu
Product information "Twillight Imperium - REX"
Evaluations 0
Read, write and discuss reviews... more
Close menu
Customer evaluation for "Twillight Imperium - REX"
Write an evaluation
Evaluations will be activated after verification.
Customers also viewed
Customers also viewed
Viewed
This website uses cookies, which are necessary for the technical operation of the website and are always set. Other cookies, which increase the usability of this website, serve for direct advertising or simplify interaction with other websites and social networks, will only be used with your consent.
Decline Accept all Configure