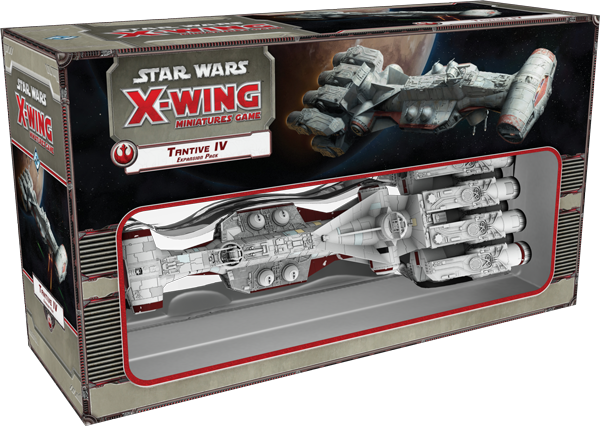 This product is currently not available.
Please inform me as soon as the product is available again.
€76.95 *

“You weren’t on any mercy mission this time. Several transmissions were beamed to this ship by Rebel spies.”
–Darth Vader

It’s time to blast through the Imperial blockade and make the jump to hyperspace. The Tantive IV Expansion Pack for X-Wing™ is now available at your local retailer! The Tantive IV Expansion Pack features one detailed, eye-catching Corellian CR90 Corvette miniature. This huge starship is so massive that it is divided into two sections, fore and aft, both of which have their own corresponding ship and damage cards. You’ll also find twenty-four new upgrades, a new maneuver template, and a new range ruler that allows the CR90 to fire its primary weapon at Range “5.” Meanwhile, as the game’s second huge starship, the Tantive IV greatly enhances a wealth of new play experiences. You can run your Corellian CR90 Corvette through the expansion’s six new missions, which can either be played individually or linked together in the campaign, Point of No Return, which offers the game’s most cinematic experience to-date. Alternatively, you can field the expansion’s iconic starship as the powerful backbone of a Rebel fleet for use in either of the game’s two new Epic Play formats, Team Epic or Epic Dogfight.

One of the most recognizable starships in the Star Wars galaxy, the Tantive IV was the blockade runner that carried R2-D2 and C-3PO near Tatooine. It was the starship on which Princess Leia Organa secreted the stolen plans for the Empire’s first Death Star. It was the starship that first followed the opening crawl of A New Hope, flashing across the screen in desperate flight from a Star Destroyer, and after it was caught, we caught our first glimpse of the Dark Lord of the Sith, Darth Vader, as he strode menacingly through the ship’s halls. Back when we first displayed our prototype CR90 miniature at Gen Con Indy 2013, we also announced that the Tantive IV, along with the GR-75 medium transport, would be released outside of the game’s standard 1/270 scale.