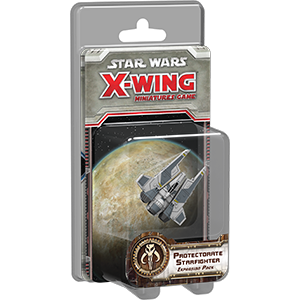 Also known as the “Fang fighter,” the Protectorate starfighter was a fast and sleek Mandalorian craft custom-built for fighter combat. The Protectorate Starfighter Expansion Pack brings this aggressive ship to X-Wing™ as one of the most potent—and most deceptively simple—vessels in the Scum and Villainy fleet with three attack and three agility. Although the ship has no shields, its pilots favor aggressive approaches, meeting their foes in deadly head-on charges. In addition to its pre-painted miniature, the expansion contains six ship cards and two upgrades.

Sleeves Std 63,5x88 mm Red
€2.50 *
Viewed
This website uses cookies, which are necessary for the technical operation of the website and are always set. Other cookies, which increase the usability of this website, serve for direct advertising or simplify interaction with other websites and social networks, will only be used with your consent.
Decline Accept all Configure