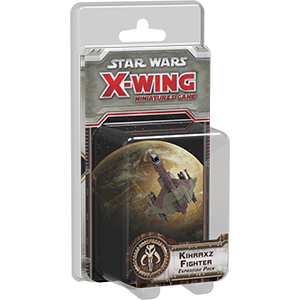 Modeled after Incom’s popular X-wing starfighter, the versatile Kihraxz was developed specifically for the Black Sun crime syndicate, whose highly paid ace pilots demanded a nimble, powerful ship to match their skills. It arrives to X-Wing™ as a well-rounded, small-base, Scum and Villainy starship with three attack, two agility, four hull, and one shield. You gain one of these miniature starfighters in the Kihraxz Fighter Expansion Pack, carefully pre-painted and sculpted at the game’s standard 1/270 scale. Additionally, the Kihraxz Fighter Expansion Pack comes with four ship cards, five upgrades, a maneuver dial, and all the tokens you need to fly this fighter into any battle in which the galaxy’s Scum have a vested interest.

This is not a complete game experience. A copy of the X-Wing Miniatures Game Core Set is required to play.
Related links to "Star Wars X-Wing: Kihraxz Fighter"
Product Information
Zu den Produkteigenschaften more
Close menu
Product information "Star Wars X-Wing: Kihraxz Fighter"
Evaluations 0
Read, write and discuss reviews... more
Close menu
Customer evaluation for "Star Wars X-Wing: Kihraxz Fighter"
Write an evaluation
Evaluations will be activated after verification.
Customers also viewed
Customers also viewed
Viewed
This website uses cookies, which are necessary for the technical operation of the website and are always set. Other cookies, which increase the usability of this website, serve for direct advertising or simplify interaction with other websites and social networks, will only be used with your consent.
Decline Accept all Configure