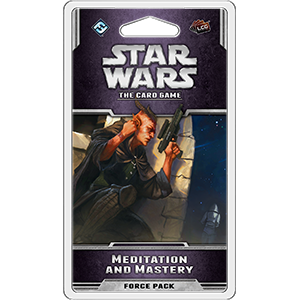 “Accelerate to attack speed. This is it, boys!”
–Red Leader, Star Wars: A New Hope

Throughout the Opposition cycle, the rivalries and feuds between affiliations dominate the game. The Jedi against the Sith. The Rebellion against the Galactic Empire. The galaxy’s scum and villainy against the loyal smugglers and spies. Now, with the third Force Pack in the cycle, you’ll have the chance to choose your side and battle to decide the fate of the galaxy.

Meditation and Mastery is the third Force Pack in the Opposition cycle for Star Wars™: The Card Game, and this expansion offers ten new objective sets (two copies each of five distinct sets), granting new options to every affiliation. Here, you’ll find new affiliated fate cards for the Rebel Alliance and the Imperial Navy, alongside some of the other new fate cards introduced in this cycle. You’ll also gain the opportunity to fly and fight alongside recognizable characters from the Star Wars saga, including Wedge Antilles, Nien Nunb, and Admiral Screed.

This is not a stand-alone deck. A Star Wars™: The Card Game Core Set is required to play.
Related links to "Star Wars LCG: Meditation and Mastery"
Product Information
Zu den Produkteigenschaften more
Close menu
Product information "Star Wars LCG: Meditation and Mastery"
Evaluations 0
Read, write and discuss reviews... more
Close menu
Customer evaluation for "Star Wars LCG: Meditation and Mastery"
Write an evaluation
Evaluations will be activated after verification.
Customers also viewed
Customers also viewed
Viewed
This website uses cookies, which are necessary for the technical operation of the website and are always set. Other cookies, which increase the usability of this website, serve for direct advertising or simplify interaction with other websites and social networks, will only be used with your consent.
Decline Accept all Configure