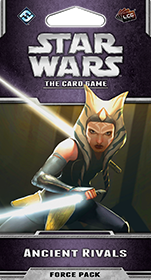 Throughout the Galactic Civil War, certain feuds and rivalries have defined countless conflicts. The Jedi battle the Sith lords, playing out the age-old struggle between the light and dark sides of the Force. The armies and navies of the Rebels and the Empire clash on planets and in the skies above them. The galaxy’s smugglers and spies struggle for supremacy against the scum that lurk in the shadows. These dynamic rivalries have shaped the Galactic Civil War, and now, with the the Opposition cycle, they will take their rightful place in Star Wars™: The Card Game as well.

Ancient Rivals kicks off the Opposition cycle and simultaneously serves as an introduction to the new themes and mechanics that will be found in the cycle. Here, you’ll find a host of cards that focus on the struggles between pairs of affiliations: Jedi and Sith, Rebel Alliance and Imperial Navy, Smugglers and Spies and Scum and Villainy. The Opposition cycle also introduces a host of new fate cards, including a new type of fate cards—fate cards with an affiliation. Ancient Rivals also offers up a host of iconic characters: the heroes and villains of Star Wars: Rebels begin to appear in the LCG®, joined by new versions of classic characters like Dengar, Han Solo, and Darth Vader. Immerse yourself in the epic conflicts and battles of the Galactic Civil War in the Opposition cycle, beginning with Ancient Rivals!

€30.95 *
Viewed
This website uses cookies, which are necessary for the technical operation of the website and are always set. Other cookies, which increase the usability of this website, serve for direct advertising or simplify interaction with other websites and social networks, will only be used with your consent.
Decline Accept all Configure