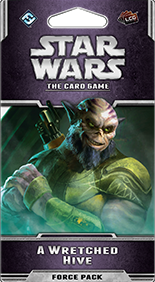 Description Product Information Evaluations 0
Description
“I was there when Lasan fell. I know why you fear those disruptors. I gave the order to use... more
Close menu
Product information "Star Wars LCG: A Wretches Hive"

“I was there when Lasan fell. I know why you fear those disruptors. I gave the order to use them.”

Ancient rivalries and feuds that span generations have long guided the course of the Galactic Civil War, deciding the fates of thousands of beings on countless worlds. Yet there are more rivalries to be found than the obvious lines drawn between factions. There is opposition between order and chaos, between the physical and the intellectual, between those who stand alone and those who work together with their friends. You’ll get a closer look at these and plenty of other interactions in A Wretched Hive, the second Force Pack of the Opposition cycle for Star Wars™: The Card Game.

A Wretched Hive continues to expand on the primary themes of the cycle, highlighting the differences between groups of opposing factions and bringing new ways to fight your battles to the forefront. You’ll also see more of the characters of Star Wars: Rebels entering the game for the first time, such as Agent Kallus and Zeb Orrelios, alongside recognizable scum like Dr. Evazan and Ponda Baba. Pursue your favorite vendettas with the second Force Pack of the Opposition cycle!