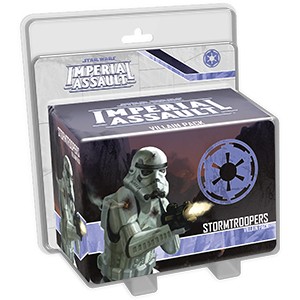 In your campaigns, this expansion offers the new Vader’s Fist Agenda set. You may goad the Rebel heroes into an attempt to sabotage the training facility of the renowned 501st Legion. On another mission, you might use the To the Last Man card to massively increase the attack and defensive power of the last Stormtrooper figure remaining in a unit, making this lone survivor a formidable opponent for any hero.

You’ll also find new skirmish game content in the Stormtroopers Villain Pack. A brand-new skirmish upgrade represents the training of the 501st Legion, offering two potent new abilities to any Stormtrooper squad enhanced with this card. At the same time, new Command cards reinforce figures after they die or invite your figures to engage in stealth tactics. Whether you play a campaign or a skirmish, this Villain Pack easily expands the ranks of your Stormtrooper armies.

Assault on Galactus Prime Expansion 1 - The...

€29.95 *
Viewed
This website uses cookies, which are necessary for the technical operation of the website and are always set. Other cookies, which increase the usability of this website, serve for direct advertising or simplify interaction with other websites and social networks, will only be used with your consent.
Decline Accept all Configure