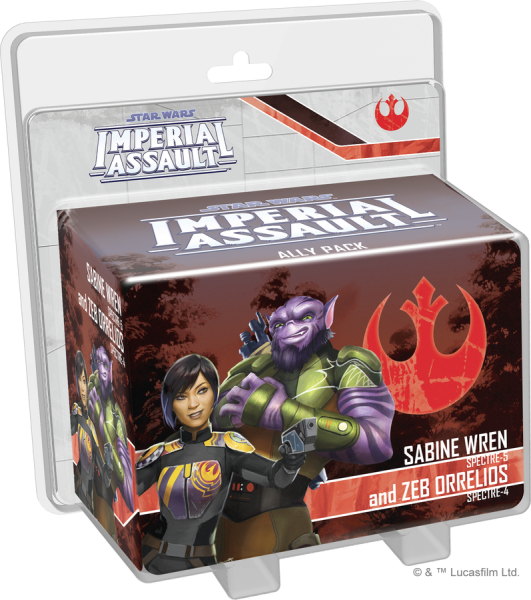 Before Luke Skywalker blew up the dreaded Death Star, before Princess Leia called for aid from an old war hero, before the Rebel Alliance crystalized into a force that would bring down a galactic empire, there was Phoenix Squadron. A band of rebels who fought against the empire in the Lothal Sector tucked away in the outer rim. Thanks to the help of the elite Spectres, they have achieved great success.

This Ally Pack contains everything you need to add these heroes to your Imperial Assault campaign and skirmish games! Daring missions, powerful command cards and beautifully sculpted figures await you in the Sabine Wren and Zeb Orrelios Ally Pack!

—description from the publisher

The included mission comes with story epilogues to permit integration as a side mission into the Tyrants of Lothal mini campaign.

Related links to "Imperial Assault: Sabine Wren and Zeb Orrelios"
Product Information
Zu den Produkteigenschaften more
Close menu
Product information "Imperial Assault: Sabine Wren and Zeb Orrelios"
Evaluations 0
Read, write and discuss reviews... more
Close menu
Customer evaluation for "Imperial Assault: Sabine Wren and Zeb Orrelios"
Write an evaluation
Evaluations will be activated after verification.
Customers also viewed
Customers also viewed
Viewed
This website uses cookies, which are necessary for the technical operation of the website and are always set. Other cookies, which increase the usability of this website, serve for direct advertising or simplify interaction with other websites and social networks, will only be used with your consent.
Decline Accept all Configure