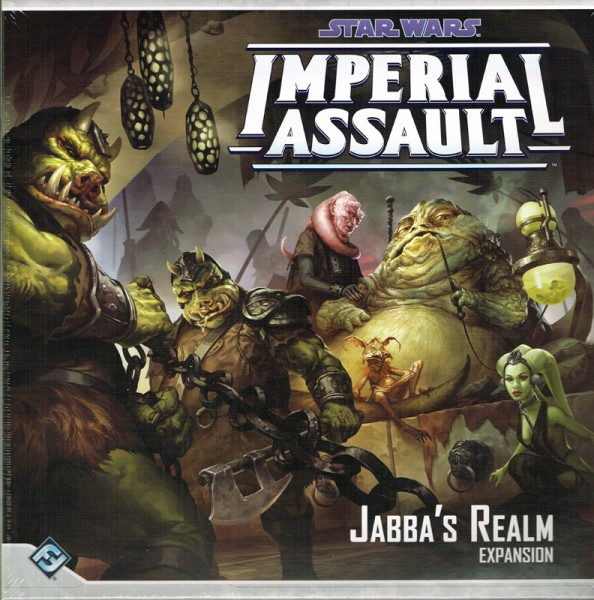 This product is currently not available.
Please inform me as soon as the product is available again.
€69.95 *

“If I told you half the things I’ve heard about this Jabba the Hutt, you’d probably short circuit.”
–C-3PO, Star Wars: Return of the Jedi

Imperial reprisals have swept the galaxy, targeting not just the Rebels, but their families and loved ones as well. In desperation, you and a team of other Rebel operatives have gathered as many refugees as you can in hopes of shepherding them to safety in the Outer Rim. Your escape is discovered, however, and you’ve been shot down on Tatooine. Here, the power of the Empire is not as strong as elsewhere—but that doesn’t mean you’re out of danger. This is the domain of Jabba the Hutt, and you’ll need to play by his rules if you want to survive.

Jabba’s Realm is a new expansion for Imperial Assault that offers a wealth of new content for your campaigns and skirmishes. You’ll find an entirely new full-length campaign that challenges you to survive among the desert wastes and criminal underworld of Tatooine, even as new skirmish missions invite you to battle in the Nal Hutta Borderlands or around the fabled Pit of Carkoon.

Eighteen new double-sided map tiles evoke the opening scenes of Return of the Jedi, giving you access for the first time to Jabba’s palace, his pleasure barge, and iconic locations like the sarlacc pit. Meanwhile, sixteen brand-new plastic figures offer new warriors and heroes for the Imperials, Rebels, and Mercenaries, even as new Command cards, Deployment cards, Agenda cards, and Class cards give you countless ways to customize your game. With characters like Jabba the Hutt, the Rancor, and Luke Skywalker as a Jedi Knight joining the game, this expansion draws you into the Star Wars saga like never before.
Related links to "Imperial assault: Jabba&#39;s Realm Expansion"
Product Information
Zu den Produkteigenschaften more
Close menu
Product information "Imperial assault: Jabba&#39;s Realm Expansion"
Evaluations 0
Read, write and discuss reviews... more
Close menu
Customer evaluation for "Imperial assault: Jabba&#39;s Realm Expansion"
Write an evaluation
Evaluations will be activated after verification.
Customers also viewed
Customers also viewed
Viewed
This website uses cookies, which are necessary for the technical operation of the website and are always set. Other cookies, which increase the usability of this website, serve for direct advertising or simplify interaction with other websites and social networks, will only be used with your consent.
Decline Accept all Configure