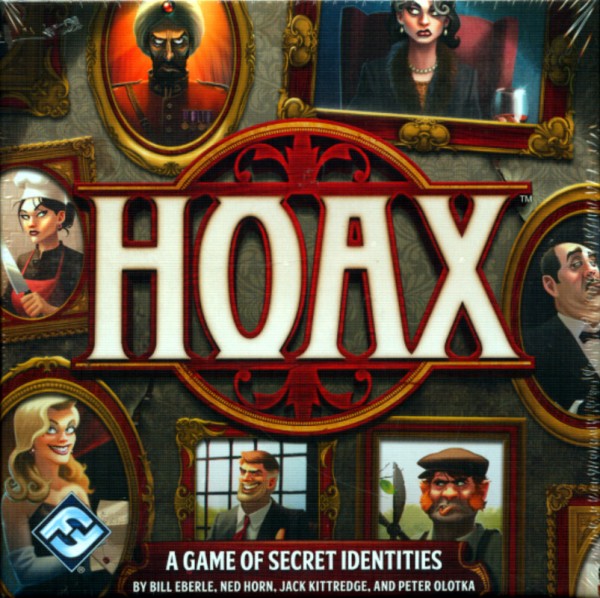 Description Product Information Evaluations 0
Description
He hadn’t seen the family since the age of eighteen, so he was certain that no one would... more
Close menu
Product information "Hoax"

He hadn’t seen the family since the age of eighteen, so he was certain that no one would recognize him as that infamously ungrateful child. Instead of his normal three-piece suit, he went into the estate meeting with dirt on his hands, grass stains on his jeans, and a list of landscaping jargon pulled up on his cell phone. He sat down between the scowling butler and his late father’s current girlfriend, and introduced himself as, “Chad. You know, the gardener.”

Hoax is a fast-paced game of secret identities for three to six players. When a ruthless and filthy rich business magnate chokes to death on a celebratory champagne cork, he leaves only one clear directive in his will: that his heir be as devious and remorseless as he was. An intense competition between the greedy members of his inner circle ensues, each determined to prove himself worthy of the business, the estate, and the accompanying billions. In Hoax, you and your friends each take on the role of one of these fortune-seekers as they attempt to eliminate their rivals using any means necessary.
Related links to "Hoax"
Product Information
Zu den Produkteigenschaften more
Close menu
Product information "Hoax"
Evaluations 0
Read, write and discuss reviews... more
Close menu
Customer evaluation for "Hoax"
Write an evaluation
Evaluations will be activated after verification.
Customers also viewed
Customers also viewed
Viewed
This website uses cookies, which are necessary for the technical operation of the website and are always set. Other cookies, which increase the usability of this website, serve for direct advertising or simplify interaction with other websites and social networks, will only be used with your consent.
Decline Accept all Configure