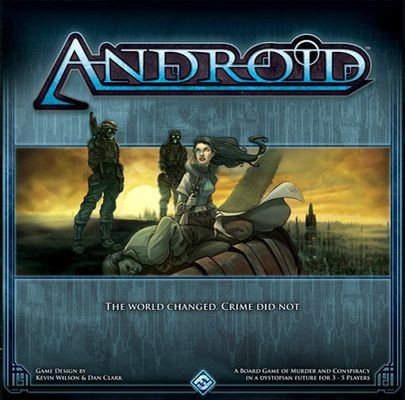 Android is a board game of murder and conspiracy set in a dystopian future. Detectives travel between the city of New Angeles and moon colony Heinlein chasing down leads, calling favors, and uncovering the sinister conspiracy beneath it all. The detectives must balance their pursuit of the murderer against their personal lives and inner demons.

Android's innovative mechanics ensure that no two detectives play alike. Will you play as Louis Blaine, the crooked cop tormented by guilt and loss? Or will you take the role of Caprice Nisei, the psychic clone who struggles to retain her sanity while proving she's just as human as anyone else?

Whomever you choose to play, you've got just two weeks to solve the murder, uncover the conspiracy, and face your personal demons. Better get moving, detective.

Android is a game for 3-5 players and takes between 2-4 hours to play.

Related links to "Android - The Boardgame"
Product Information
Zu den Produkteigenschaften more
Close menu
Product information "Android - The Boardgame"
Evaluations 0
Read, write and discuss reviews... more
Close menu
Customer evaluation for "Android - The Boardgame"
Write an evaluation
Evaluations will be activated after verification.
Customers also viewed
Customers also viewed
Viewed
This website uses cookies, which are necessary for the technical operation of the website and are always set. Other cookies, which increase the usability of this website, serve for direct advertising or simplify interaction with other websites and social networks, will only be used with your consent.
Decline Accept all Configure