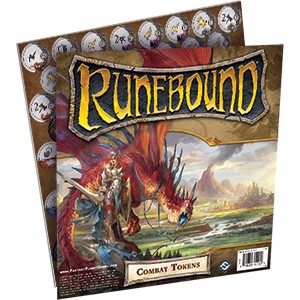 This product is currently not available.
Please inform me as soon as the product is available again.
€4.95 *

Runebound is a game of high fantasy and adventure, inviting players to embody heroes of the realm, traveling between quests and battling terrifying monsters. Now, you have the chance to swell your armory with additional copies of the combat tokens included in the Runebound Core Set. The Runebound Combat Tokens is a sheet of punchboard that offers an additional copy of all the combat tokens included in the Core Set.

You need Runebound the core game to play with this accessory.
Related links to "Runebound 3rd Edition Combat Tokens"
Product Information
Zu den Produkteigenschaften more
Close menu
Product information "Runebound 3rd Edition Combat Tokens"
Evaluations 0
Read, write and discuss reviews... more
Close menu
Customer evaluation for "Runebound 3rd Edition Combat Tokens"
Write an evaluation
Evaluations will be activated after verification.
Customers also viewed
Customers also viewed
Viewed
This website uses cookies, which are necessary for the technical operation of the website and are always set. Other cookies, which increase the usability of this website, serve for direct advertising or simplify interaction with other websites and social networks, will only be used with your consent.
Decline Accept all Configure