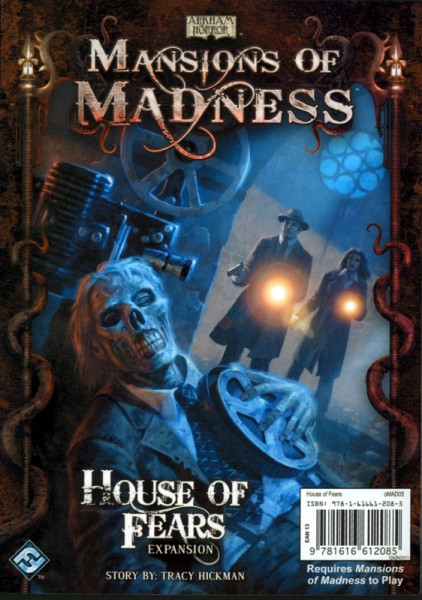 An influential film director is holding a screening of his latest production in the abandoned estate Whale Manor, and you’ve been asked to attend! There’s just one catch: Whale Manor is haunted by the spirits of dead actors, all of whom are cursed to relive the drama of their films again and again.

House of Fears is a Print on Demand story expansion for Mansions of Madness! This cinematic adventure by acclaimed novelist Tracy Hickman thrusts players into a living 1920’s movie. But can they escape the horror before the film’s tragic ending?

This is just an expansion. You'll need the first edition of Mansion of Madness to play with it!
Related links to "Mansions of Madness - House of Fears Expansion"
Product Information
Zu den Produkteigenschaften more
Close menu
Product information "Mansions of Madness - House of Fears Expansion"
Evaluations 0
Read, write and discuss reviews... more
Close menu
Customer evaluation for "Mansions of Madness - House of Fears Expansion"
Write an evaluation
Evaluations will be activated after verification.
Customers also viewed
Customers also viewed
Viewed
This website uses cookies, which are necessary for the technical operation of the website and are always set. Other cookies, which increase the usability of this website, serve for direct advertising or simplify interaction with other websites and social networks, will only be used with your consent.
Decline Accept all Configure