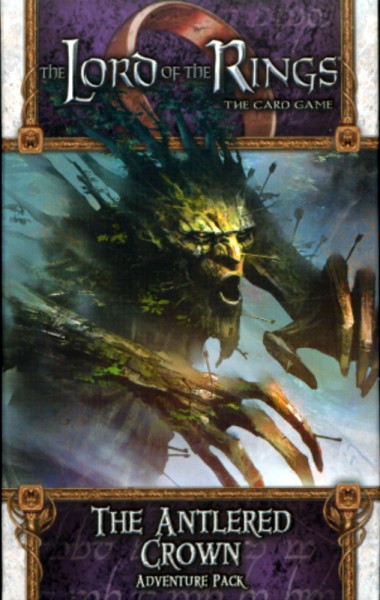 Description Product Information Evaluations 0
Description
“There are many that cry in the Dunland tongue,” said Gamling. “I know that tongue. It is an... more
Close menu
Product information "Lord of the Rings LCG: The Antlered Crown"

“There are many that cry in the Dunland tongue,” said Gamling. “I know that tongue. It is an ancient speech of men, and once was spoken in many valleys of the Mark. Hark! They hate us, and they are glad; for our doom seems certain to them.”
–J.R.R. Tolkien, The Two Towers

War has come to Dunland!

The Antlered Crown is the sixth and final Adventure Pack in The Ring-maker cycle for The Lord of the Rings: The Card Game. After having found Celebrimbor’s hidden forge and securing its secrets from a horde of Orcs, several of Middle-earth’s heroes near the end of their service to the White Council. First, however, they must return to Isengard, and this means passing through the hills of Dunland, where war has broken loose.

The Antlered Crown introduces sixty new cards, including a new Rohan hero, three copies of each new player card, and a new scenario that carries players deep into battle with the wild men of Dunland. Amid ferocious combats and brutal treachery, you’ll find plenty of moments for heroics, and you’ll have plenty need for stalwart allies. Naturally, you'll also find heroics and combat-ready allies in abundance. Allies and events further depict the ability of Rohan’s finest warriors to charge headlong into battle, and a handful of cards strengthen the cycle’s introduction of the Ent trait.