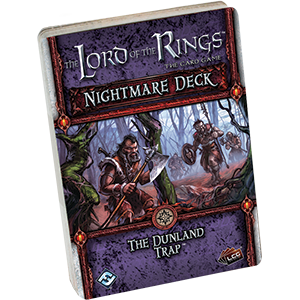 This product is currently not available.
Please inform me as soon as the product is available again.
€10.95 *

Can you survive the waves of ferocious Dunlendings that assail you from all sides with The Dunland Trap Nightmare Deck? Its new encounter cards force you even further back on the defensive as you stumble into a Dunlending ambush. New enemies and treachery cards reinforce the original scenario's design adding new effects that trigger when you draw cards, as well as others that discard the cards you've just drawn, forcing you to draw more. Meanwhile, several new locations offer the scenario's Dunland enemies a measure of cover that makes it harder to damage them in the staging area and harder to avoid.

Nightmare Decks are available via FFG's In-House Manufacturing and may differ subtly in appearance and texture from Core Set cards. Players are thus encouraged to utilize opaque or art sleeves while playing in Nightmare Mode.