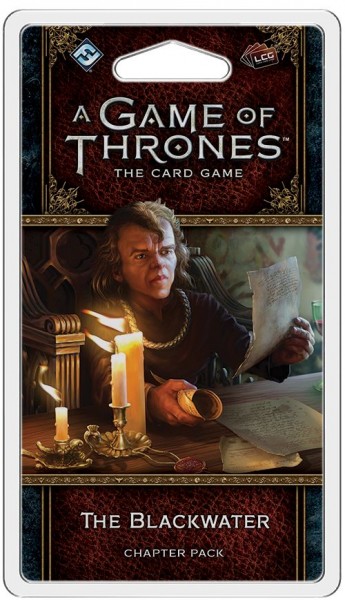 The Blackwater is the fifth Chapter Pack in the King's Landing cycle for A Game of Thrones: The Card Game.

The King’s Landing cycle takes a new approach to the Game of Thrones LCG. Rather than following the plot of A Song of Ice and Fire, this cycle is centered around the capital of the seven kingdoms, allowing you to explore the world of Westeros more freely than ever before. Every Chapter Pack in this cycle features three copies each of twenty unique cards to strengthen your decks and help you embrace the deadly intrigues of A Song of Ice and Fire with the continued cultivation of the shadow keyword, first reintroduced in the Dance of Shadows cycle.

Your journey to the capital of the seven kingdoms draws you beyond the city walls to explore the surrounding waterways that acted at the setting of the greatest battle in the War of the Five Kings. This battle was the making of many warriors, and you may elevate your own knights to the rank of Kingsguard if you deem them worthy. As shadows continue to creep in from the North, the Reach, and the streets of King's Landing itself, you may find that need more protection than ever if your House isto earn victory and claim the Iron Throne!

A Game of Thrones LCG 2nd - At the Gates

A Game of Thrones LCG 2nd - City of Secrets

A Game of Thrones LCG 2nd - Beneath the Red Keep

A Game of Thrones LCG 2nd - Long May He Reign

A Game of Thrones LCG 2nd - Pit of Snakes

€16.95 *
Customers also viewed
Viewed
This website uses cookies, which are necessary for the technical operation of the website and are always set. Other cookies, which increase the usability of this website, serve for direct advertising or simplify interaction with other websites and social networks, will only be used with your consent.
Decline Accept all Configure