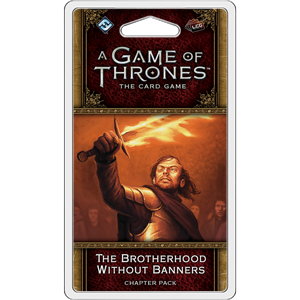 Description Evaluations 0
Description
Unsmiling, Lord Beric laid the edge of his longsword against the palm of his left hand, and drew... more
Close menu
Product information "A Game of Thrones LCG 2nd - The Brotherhood without Banner"

Unsmiling, Lord Beric laid the edge of his longsword against the palm of his left hand, and drew it slowly down. Blood ran dark from the gash he made, and washed over the steel. And then the sword took fire.
–George R.R. Martin, A Storm of Swords

The tumult of the War of the Five Kings shook the foundations of Westeros, fracturing the peace that had endured since Greyjoy’s Rebellion. In this new war, the Great Houses were forced to choose sides, some supporting Renly or Stannis Baratheon, others lending aid to Robb Stark, Joffrey Baratheon, or Balon Greyjoy. Yet there are also those who fight for no king, but for the people. To some, they are no more than outlaws, but for others, these men and women are champions and heroes—true knights.

Take up arms with outlaws in The Brotherhood Without Banners, the sixth Chapter Pack of the Blood and Gold cycle for A Game of Thrones: The Card Game! As the cycle draws to a climactic conclusion, you’ll have the chance to see the themes of the cycle more fully realized, with new economy cards and new support for the bestow keyword across all eight factions. Whether you’re serving the Night’s Watch with Donal Noye or leading the brotherhood with Beric Dondarrion, this expansion has plenty to offer, including a brand-new agenda inviting you to join the brotherhood without banners.
Related links to "A Game of Thrones LCG 2nd - The Brotherhood without Banner"
Evaluations 0
Read, write and discuss reviews... more
Close menu
Customer evaluation for "A Game of Thrones LCG 2nd - The Brotherhood without Banner"
Write an evaluation
Evaluations will be activated after verification.
Customers also viewed
Customers also viewed
Viewed
This website uses cookies, which are necessary for the technical operation of the website and are always set. Other cookies, which increase the usability of this website, serve for direct advertising or simplify interaction with other websites and social networks, will only be used with your consent.
Decline Accept all Configure