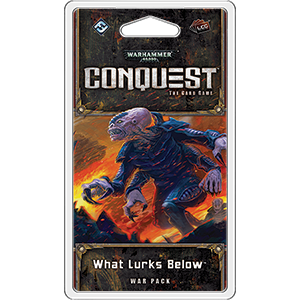 Description Product Information Evaluations 0
Description
“I can think of few greater xenos threats to the Imperium than that of the Genestealer. An... more
Close menu
Product information "Conquest LCG: What Lurkes Below"

“I can think of few greater xenos threats to the Imperium than that of the Genestealer. An apex predator possessed of intelligence and cunning that rival our own, they exist for the sole purpose of reproducing in vast numbers and sowing utter chaos in their wake.”


–Inquisitor Kalistradi in The Nature of the Beast

The space hulk Kaerux Erameas has crash-landed on the surface of Sacaellum, spilling forth legions of Chaos warriors devoted to Khorne. But as these Chaos warriors join the fight, a dark presence stirs in the abandoned space hulk. Long dormant, a host of Tyranid Genestealers have caught the scent of blood outside the barren lower levels of the voidship. As they swarm out of the Kaerux Erameas onto the surface of Sacaellum, the Tyranids may overwhelm all other armies with their endless hunger.

What Lurks Below is the fourth pack in the Planetfall cycle, bringing another faction to bear on the fight for Sacaellum. Here, you’ll find cards that support the main themes of the cycle by bringing new significance to the planet type symbols and inviting you to fight for your faction’s unique goals. This War Pack also offers a new Tyranids Genestealer warlord and his eight-card signature squad as well as fifty-one other cards (three copies each of seventeen distinct cards) to swell the armies of other factions. You can swarm out of the Kaerux Erameas with the Tyranids. You can declare a holy crusade with the Black Templars. You may even travel across the sector instantaneously in a corrupted teleportarium. In What Lurks Below, every faction gains new ways to wage war and new reasons to fight.