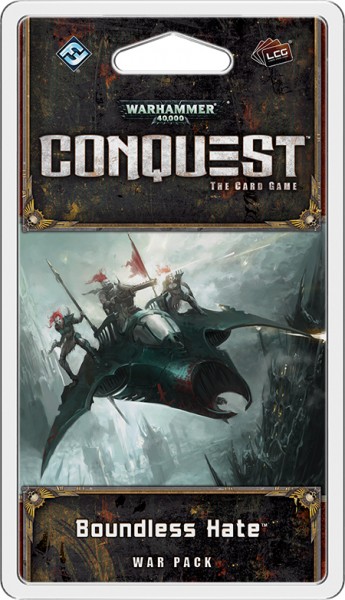 Your armies will fight harder than you thought possible when you battle on a planet with symbols that align with your faction’s goals. Of course, in addition to a new focus on the planets of the Traxis sector, this expansion offers new cards to swell every faction’s armies, including the Tyranids faction introduced in The Great Devourer. A new Chaos warlord invites you to fight for the glory of Khorne, while a Dark Eldar archon warlord allows you to capture slaves from key planets. Spread war across the Traxis sector with the Boundless Hate War Pack!


This is not a stand alone game. You need Conquest the card game to play with it!
Related links to "Conquest LCG: Boundless Hate"
Product Information
Zu den Produkteigenschaften more
Close menu
Product information "Conquest LCG: Boundless Hate"
Evaluations 0
Read, write and discuss reviews... more
Close menu
Customer evaluation for "Conquest LCG: Boundless Hate"
Write an evaluation
Evaluations will be activated after verification.
Customers also viewed
Customers also viewed
Viewed
This website uses cookies, which are necessary for the technical operation of the website and are always set. Other cookies, which increase the usability of this website, serve for direct advertising or simplify interaction with other websites and social networks, will only be used with your consent.
Decline Accept all Configure