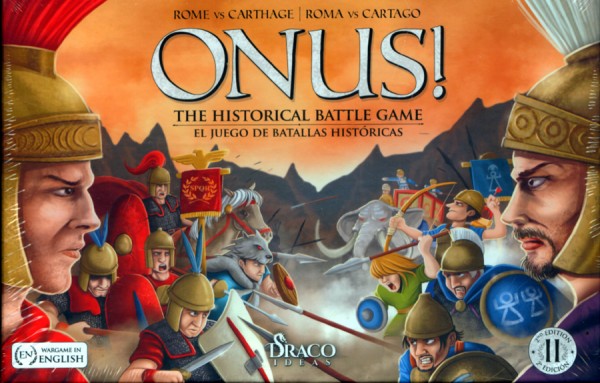 This product is currently not available.
Please inform me as soon as the product is available again.
€32.95 *

Description Product Information Evaluations 0
Description
Have you ever dreamed of commanding a powerful army? Have you ever imagined leading troops,... more
Close menu
Product information "ONUS! Rome vs. Carthage"

Have you ever dreamed of commanding a powerful army? Have you ever imagined leading troops, which included elephants over the Pyrenees and the Alps to try to conquer Rome? Have you enjoyed a good historical novel dated on the old Republic of Rome, and you would like to travel to that time?

ONUS! Rome Vs Carthage is a war game similar to miniatures games in which both sides fight an ancient battle. The game is mainly based on the II Punic war, although battles from III to I B.C centuries can be also simulated. The game concept combines both, orders and events cards, that makes each game different and each combat becomes unpredictable and thrilling.

Units are represented by cards which have been scaled around a Centuria (also known as Century) or to a Maniple (also known as Manipulus), representing formations from 80 to 100 men for Infantry units, 20 cavalrymen for Cavalry units or 6 Elephants.

Units have their own set of traits to represent permanent attributes of the unit, like Melee Combat, Range Attack, Defensive capacity, Morale and Life, and Movement capacity. This set of traits gets bonuses and penalties depending on the ongoing situation and combat engagements.

Units also have their unique set of skills to represent specific abilities they can perform: from defensive formations to extremely effective techniques to attack enemies. Some of these skills need to be activated, meaning only one of them can be used in an engagement, while others are inherent to the units.

Leadership is represented in the game by the figure of the General. A General’s token represent his HQ and its own escort. In addition to the leadership benefit, a General grants bonuses to nearby units, boosting the morale of the troops and providing additional benefits when they are engaged with the enemy in those bloody encounters. Both, Hannibal and Scipio, two well-known Generals are included in the game with their unique set of bonuses! Also, Heroes, Veterans and Elite units take part in Onus!

€42.00 *
Viewed
This website uses cookies, which are necessary for the technical operation of the website and are always set. Other cookies, which increase the usability of this website, serve for direct advertising or simplify interaction with other websites and social networks, will only be used with your consent.
Decline Accept all Configure