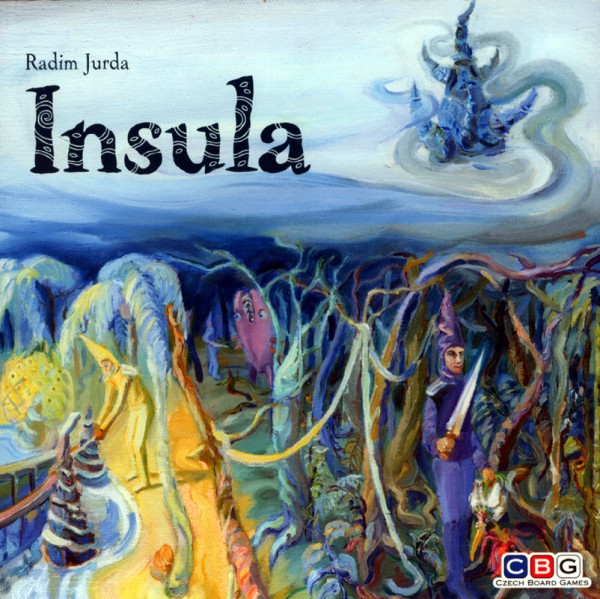 Insula is a game for 2-5 players that takes less then an hour to play. Insula nicely combines cooperative and competitive modes of playing. The players represent a group of adventurers intending to explore the mysterious island. Your ship has landed on the island, and your goal is to gain entry into the Citadel deep inside the inland forests and defeat Kingosh, the dark lord of the island.

The game has various endings. One player can win by defeating Kingosh alone and claiming the fruit of fulfilled wishes for herself. The island itself can win and turn you all into more pitiful guardians roaming aimlessly through the forests. Your rivalry helps the dark lord. He cunningly uses a system of curses to pit you against each other. Therefore, sometimes it is better to put your differences aside and combine your abilities both during the game and in the final battle. You can defeat Kingosh together and share the magical fruit, each getting one wish. In that case,there will be multiple winners, but it's definitely better than to be turned into a guardian and shamble through the dark forest for eternity. However, it won't bring you as much glory as defeating the dark lord by yourself.

In the end, the choice is yours - by offering many styles of play Insula gives you opportunity to choose your preferred way.

Storyline: "Hidden by a veil of time, in the middle of a stormy sea, tere lies a mysterious island. A legend tells us about a mythical citadel standing proudly in its center. It is said that the mighty fortress houses an ancient tree that bears fruit of fulfilled wishes. But this magical treasure is fiercely guarded by the master of the island, who in his jealousy and greed cursed his realm, and by dangerous predators roaming the island forests – the guardians.A ship aproaches. A group of daring adventurers prepared to conquer the treasure lands on the shore. To succeed, they must explore the mysterious island, collect and use magical flowers, fight the guardians, compete and also cooperate. But they have to work quickly, because if they don't succeed before the dusk, a curse will completely engulf them and turn them into yet another mindless servants of the island, the guardians."

Related links to "Insula"
Product Information
Zu den Produkteigenschaften more
Close menu
Product information "Insula"
Evaluations 0
Read, write and discuss reviews... more
Close menu
Customer evaluation for "Insula"
Write an evaluation
Evaluations will be activated after verification.
Customers also viewed
Customers also viewed
Viewed
This website uses cookies, which are necessary for the technical operation of the website and are always set. Other cookies, which increase the usability of this website, serve for direct advertising or simplify interaction with other websites and social networks, will only be used with your consent.
Decline Accept all Configure