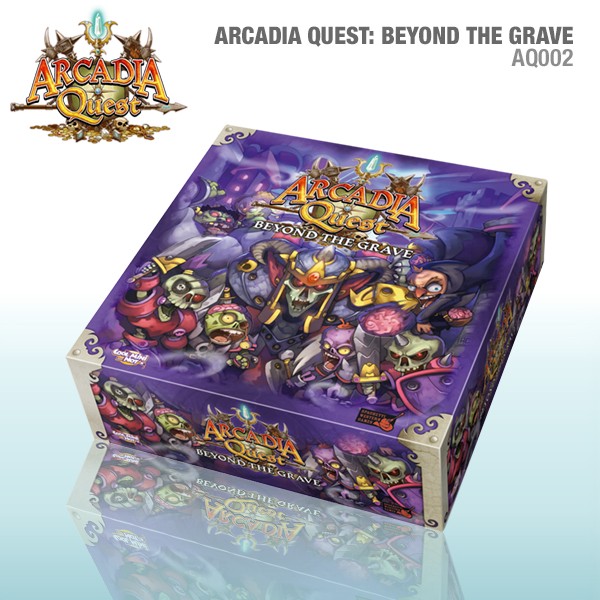 This product is currently not available.
Please inform me as soon as the product is available again.
€63.95 *

Description Product Information Evaluations 0
Description
Dr. Spider's vile experiments in his search for immortality have unleashed the undead on the... more
Close menu
Product information "Arcadia Quest - Beyond the Grave"

Dr. Spider's vile experiments in his search for immortality have unleashed the undead on the streets of Arcadia! Ghosts, zombies, and skeletons terrorize the city under the command of an ancient legend, now freed from its tomb: the Dread King! It's time for your heroes to put these monsters back where they belong: six feet underground!
In this campaign expansion for Arcadia Quest, players will pit their Guilds against the Dread King's undead horde and Dr. Spider's freaky sidekicks. Progressing through an all-new branching campaign, the Heroes will earn new weapons, equipment, abilities, and magic spells unearthed straight from the afterlife!

This expansion introduces several new mechanics to the game, including equipment that gives Heroes more power the more times they're killed, magic spells that can banish their target to the netherworld, and ghosts that can move and attack through walls. The new Tombstone cards allow Heroes to trigger all sorts of unexpected events to hinder their opponents, aid their guild, and even control the Monsters on the board!
No game master is required. Recruit your Heroes (with the addition of the Black Brothers) and dig up the loot to build unstoppable combinations and become the supreme Guild! Only you can vanquish this menace from Beyond the Grave!