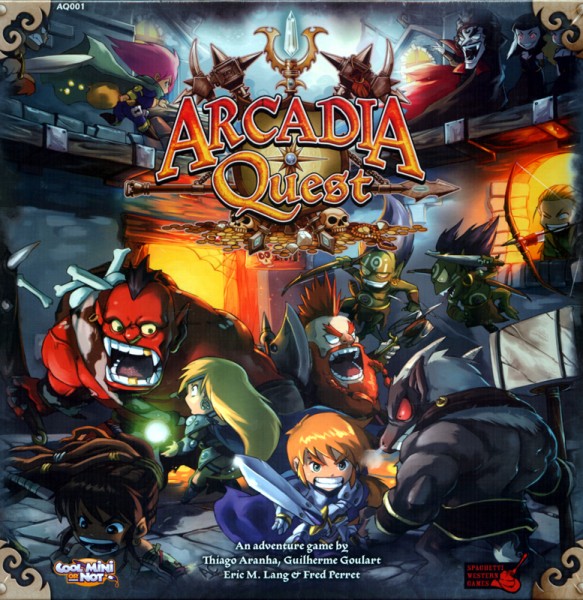 This product is currently not available.
Please inform me as soon as the product is available again.
€99.95 *

Description Product Information Evaluations 0
Description
Arcadia, the sacred city that holds the balance of night and day in the world, has been... more
Close menu
Product information "Arcadia Quest"

Arcadia, the sacred city that holds the balance of night and day in the world, has been plunged into darkness by the vile Lord Fang.

Arcadia Quest is an exciting new adventure board game for 2 to 4 players created by a quartet of designers, including Mr. Eric Lang. Each player controls a Guild of 3 Heroes, competing to be the liberators of the city of Arcadia and, more importantly, to become the richest and most powerful Guild in the land!

In Arcadia Quest, players lead guilds of intrepid heroes on an epic campaign to dethrone the vampire lord and reclaim the mighty Arcadia for their own. But only one guild may lead in the end, so players must battle against each other as well as against the monstrous occupying forces. Through the branching scenarios of the campaign, the heroes gain awesome new weapons and abilities, and the game remembers the heroic deeds of players from one session to the next, unlocking exciting new possibilities in future scenarios!

It is a campaign-based game for 2 to 4 players, where each player controls a guild of three unique heroes, facing off against the other players and the various monsters controlled by the game. Players need to accomplish a series of quests in order to win each scenario and choose where to go next in the campaign.

€75.95 *
Viewed
This website uses cookies, which are necessary for the technical operation of the website and are always set. Other cookies, which increase the usability of this website, serve for direct advertising or simplify interaction with other websites and social networks, will only be used with your consent.
Decline Accept all Configure