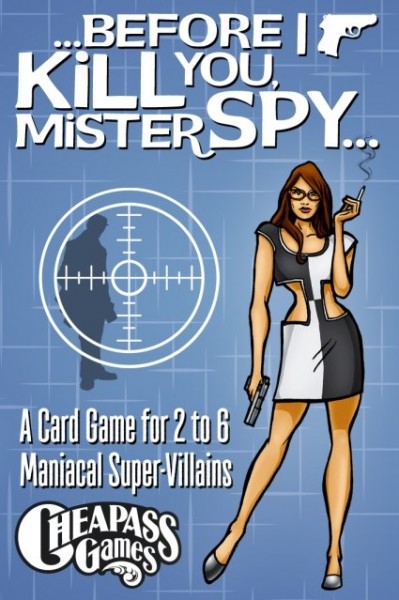 This product is currently not available.
Please inform me as soon as the product is available again.
€10.95 *

"Before I Kill You, Mister Spy, allow me to reveal to you the full extent of my depravity, by hunting you alive on my wild game preserve."

Alas, the tortured life of a super-villain. Every time you capture a Spy there is a difficult choice to make: to kill him immediately, or to share your secret plans with him in the hopes that he will be the only one alive capable of understanding. Unfortunately, there's a chance that he will escape when you do this. But if not, he's worth twice as many points.

That's the premise of Before I Kill You, Mister Spy, a classic Cheapass card game that returns in a new format in Summer 2016. This will be the third major edition of the game, counting the original 54-card version with a name we can't tell you (replace "Spy" with a the name of a well-known spy), and the 110-card "James Ernest's Totally Renamed Spy Game" from 2004.

This edition of Before I Kill You, Mister Spy returns to the roots of the game in many ways, with a smaller, more portable deck similar in composition to the first edition. The rules are significantly overhauled, but the premise is the same: You're all super-villains, trapping spies and taunting them for extra points.

The look of the new cards has changed, but not the card details, and we're pleased to announce that the new rules will be backward-compatible with the older version of the deck. And, anyone who wants the new version will be able to pick it up in stores starting in June.