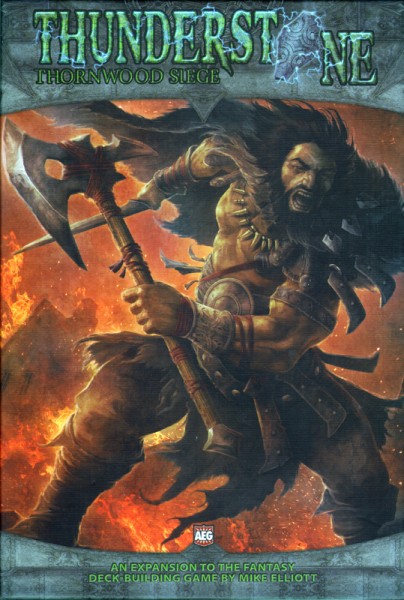 Deep in the heart of Thornwood Forest lies the Stone of Blight, one of the Thunderstones desperately needed for the salvation of the world. With the forces of Doom ravaging the lands, time is growing short. When brought together, the Stones have enough power to cast him out of the world- but every stone must be captured if the heroes hope to succeed!

The heroes are now gathered in Wulfburg at the border of the forest, prepared to brave the dangers of the wood and seek out the Thunderstone, but there is a problem: not only is the Stone fiercely guarded by Doom’s minions, they are attacking the town.

You must break the siege!

This expansion to Thunderstone introduces new monsters such as the Raiders and Siege Engines which bring the battle to you!  These monsters can destroy cards in the village, kill heroes not yet hired, and even hurt you on turns when you are avoiding the dungeon!

Will you survive to claim the Thunderstone?

€29.95 *
Viewed
This website uses cookies, which are necessary for the technical operation of the website and are always set. Other cookies, which increase the usability of this website, serve for direct advertising or simplify interaction with other websites and social networks, will only be used with your consent.
Decline Accept all Configure